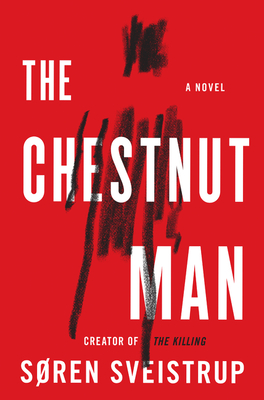 From the creator of The Killing, “a full-throttle thriller in the tradition of classic Stieg Larsson” (A.J. Finn, author of The Woman in the Window).


Praise For The Chestnut Man: A Novel…

“Cunningly plotted  . . . . Although it’s hard to look away from Sveistrup’s fiendish villain, the good guys are also worthy of your attention.” — New York Times Book Review

“This might just be the thriller of the year. The Chestnut Man grips you from the opening page and never lets go, as we’re pulled into a haunting whirlwind of secrets, deception and the dark side of the soul. The policing is top-notch, of course, and the characters—good and bad—are so real we’re sure we’ve met them before. Brilliant!” — Jeffery Deaver, author of The Never Game

“A full-throttle thriller in the tradition of classic Stieg Larsson, drenched in atmosphere and charged with adrenaline. Buckle up. You’ll gulp down every word. I loved this book.” — A.J. Finn, author of the The Woman in the Window

“This is a page-turner that will make you hesitate before turning the page, so unnerving is the violence. One of the best and scariest crime novels of the year, it adds to its rewards by promising us at least one sequel. A tantalizing, un-put-down-able novel by an instant master of the form.” — Kirkus Reviews, starred review

“Superb… Sveistrup creates a plot so intricately woven that even a seasoned crime reader won’t guess the ending. This book is the best kind of terrifying.” — Library Journal, starred review

“A big, bold, spend-all-day-reading thriller.... In his debut crime novel, Søren Sveistrup instantly establishes himself as a must-read author for fans of Nordic Noir legends Jo Nesbø and Lars Kepler—and, for that matter, as a must-read for any reader who just wants a gripping thriller to sink their teeth into.” — Crime by the Book

“A thrilling page-turning story with lots of twists and turns that will keep you reading right to the last page.” — Red Carpet Crash

Søren Sveistrup is an internationally acclaimed script writer, creator and film producer of several TV series. From 2007 to 2012 he was the creator and writer of THE KILLING, which has won several international awards, been sold to more than a hundred countries all over the world and remade for AMC by Fox Television Studios in the US. He lives in Copenhagen.
Loading...
or support indie stores by buying on