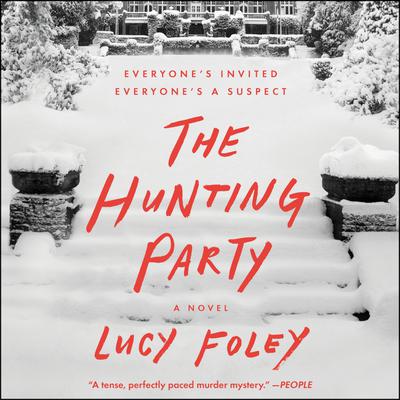 “Lucy Foley’s The Hunting Party is a slick, streamlined murder mystery set on a remote Scottish luxury estate. A group of old friends get together for their yearly New Year’s trip, but after over a decade of closeness, some of them may be near the breaking point. Foley uses the multiple-narrator approach to distort the reader’s perspective and challenge their assumptions, but it doesn’t feel excessive. With multiple puzzles that come together to create the bigger picture and a short timeline that adds to the claustrophobic urgency, this novel is a devilishly thrilling winter read.”
— Annie Metcalf, Magers & Quinn Booksellers, Minneapolis, MN
View the List

For fans of Ruth Ware and Tana French, a shivery, atmospheric, page-turning novel of psychological suspense in the tradition of Agatha Christie, in which a group of old college friends are snowed in at a hunting lodge . . . and murder and mayhem ensue.

All of them are friends. One of them is a killer.

During the languid days of the Christmas break, a group of thirtysomething friends from Oxford meet to welcome in the New Year together, a tradition they began as students ten years ago. For this vacation, they’ve chosen an idyllic and isolated estate in the Scottish Highlands—the perfect place to get away and unwind by themselves.

They arrive on December 30th, just before a historic blizzard seals the lodge off from the outside world.

Two days later, on New Year’s Day, one of them is dead.

The trip began innocently enough: admiring the stunning if foreboding scenery, champagne in front of a crackling fire, and reminiscences about the past. But after a decade, the weight of secret resentments has grown too heavy for the group’s tenuous nostalgia to bear. Amid the boisterous revelry of New Year’s Eve, the cord holding them together snaps.

Keep your friends close, the old adage goes. But just how close is too close?

LUCY FOLEY is a former editor at Hodder Fiction and has been both a literary agent and a bookseller. An avid painter, she now writes full time and lives in London, England.