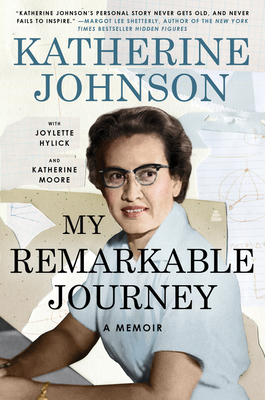 The remarkable woman at heart of the smash New York Times bestseller and Oscar-winning film Hidden Figures tells the full story of her life, including what it took to work at NASA, help land the first man on the moon, and live through a century of turmoil and change.

In 2015, at the age of 97, Katherine Johnson became a global celebrity. President Barack Obama awarded her the prestigious Presidential Medal of Freedom—the nation’s highest civilian honor—for her pioneering work as a mathematician on NASA’s first flights into space. Her contributions to America’s space program were celebrated in a blockbuster and Academy-award nominated movie.

In this memoir, Katherine shares her personal journey from child prodigy in the Allegheny Mountains of West Virginia to NASA human computer. In her life after retirement, she served  as a beacon of light for her family and community alike.  Her story is centered around the basic tenets of her life—no one is better than you, education is paramount, and asking questions can break barriers. The memoir captures the many facets of this unique woman: the curious “daddy’s girl,” pioneering professional, and sage elder.

This multidimensional portrait is also the record of a century of racial history that reveals the influential role educators at segregated schools and Historically Black Colleges and Universities played in nurturing the dreams of trailblazers like Katherine. The author pays homage to her mentor—the African American professor who inspired her to become a research mathematician despite having his own dream crushed by racism.

Infused with the uplifting wisdom of a woman who handled great fame with genuine humility and great tragedy with enduring hope, My Remarkable Journey ultimately brings into focus a determined woman who navigated tough racial terrain with soft-spoken grace—and the unrelenting grit required to make history and inspire future generations.


Praise For My Remarkable Journey: A Memoir…

“Katherine Johnson was a fierce intellect, a commanding presence, a determined boundary breaker, a passionate advocate for justice, and, simultaneously, one of the most kind, gentle, and humble spirits I have ever met.  The story of this human computer whose calculations changed the world is also the story of a woman of deep, abiding faith whose trust in God and whose determination to excel changed everyone around her.  In this book, in her own words, her story rises like a rocket, triumphantly and majestically.  Reading it, you will feel your spirit soar.” — Brian K. Blount, President of the Union Presbyterian Seminary, and Former Pastor to Katherine

“Her brilliance and numbers helped me and many others reach the stars. A storied and rich legacy that will resonate with many generations of explorers.”  — Astronaut Leland Melvin, author of Chasing Space

“A telling and inspirational look into the amazing life of Katherine G. Johnson that goes beyond the numbers to tell a story of brilliance, perseverance and compassion.  Katherine’s journey charted a course to the stars both compelling and beautiful. A story of her humanity, her genius and her compassion that enabled both the dreams of a Nation and of every individual she encountered.”  — Clayton P. Turner, Director of NASA’s Langley Research Center

“This compelling memoir takes us on Katherine’s journey as she navigates social forces, great loss, and personal triumph. Katherine demonstrated self-responsibility, determination, a great work ethic, and as her father taught her, she remained humble even after receiving many prestigious recognitions and awards. Her memoir captures the essence of the values our program wants to exemplify and having her name on our building inspires us to honor her legacy.” — Gregory Blaney, Director, NASA’s Katherine Johnson Independent Verification and Validation Facility, Fairmont, WV

“Katherine Johnson’s story shows us how to make it to the moon and back...and beyond.”  — Ted Melfi, Director of Hidden Figures

“Katherine Johnson's story of accomplishment and persistence deserves to be part of the nation's Civil Rights archive. Her narrative--from the Allegheny Mountains in West Virginia to a key position at NASA—illustrates a triumph of intellect, optimism and grace that is too often ignored in the first draft of history, especially in the case of accomplished Black mathematicians and scientists. My Remarkable Journey offers a rare private glimpse into an admirable arc of the life of this distinguished centenarian, reaching from White Sulphur Springs farm roads to Barack Obama's White House.” — Howell Raines, former executive editor of The New York Times, is a Pulitzer Prize winner and author of My Soul Is Rested, an oral history of the civil rights movement.

"Examples of relentless determination in the face of adversity linger with the reader, showing what truly makes Johnson’s journey remarkable. Yes, her mathematical genius was inspiring. Equally inspiring was her grit."
— Science News

“Johnson’s work at NASA is only one part of her extraordinary life, as recounted in this lovely posthumous memoir, co-written with her daughters. . . . Readers will enjoy Johnson’s personal accounts of the space race and the roles of Black women in STEM. This wonderful, insightful memoir is the perfect companion piece to Margot Lee Shetterly’s best-selling Hidden Figures, which recounted the lives of Johnson and her colleagues Dorothy Vaughan and Mary Jackson.” — Library Journal (starred review)

“Johnson is a warm and compassionate author, filling her pages with the most personal of stories while also illuminating the times she lived through with an appreciation for all the dramatic changes occurring round her. Truly a lovely read, this is an important addition to every bookshelf devoted to great Americans.”
— Booklist (starred review)

Katherine Johnson, a 1937 West Virginia State University graduate, was an American mathematician whose calculations of orbital trajectories for NASA were critical to the success of U.S. spaceflights. During her thirty-five years at NASA and its predecessor, she earned a reputation for mastering complex manual calculations and helped pioneer the use of computers to perform the tasks. The space agency noted her "historical role as one of the first African-American women to work as a NASA scientist." In 2015, President Barack Obama awarded Katherine the nation’s highest civilian award, the Presidential Medal of Freedom. The upcoming 2021 launch of a USAF Space Force GPS III Satellite has been named in her honor, and she has been awarded thirteen honorary doctorate degrees. Four major buildings, including two NASA facilities, have been named in her honor. She died in February 2020 at the age of 101.