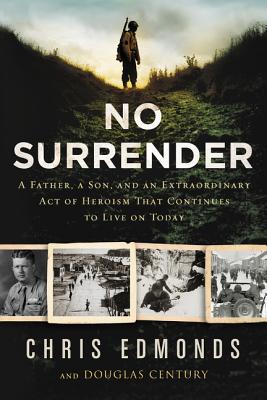 A Father, a Son, and an Extraordinary Act of Heroism That Continues to Live on Today

In the tradition of #1 New York Times bestsellers like Unbroken, Boys on the Boat, Band of Brothers, and Schindler’s List, No Surrender is an unforgettable story of a father’s extraordinary acts of valor in the treacherous final days of World War II and a son’s thrilling journey to discover them—an epic narrative of bravery, compassion, and faith.

In No Surrender, Chris Edmonds tells the inspiring and unforgettable story of his father, Roddie, a humble American soldier and his incredible acts of heroism in the waning days of World War II. Captured at the Battle of the Bulge, Roddie Edmonds was the highest-ranking American solider at Stalag 9A, a POW camp near Ziegenhain, Germany. A simple, soft-spoken man, Roddie was also a man of deep inner strength and unwavering Christian faith. Driven to the limits of endurance, he stared down the barrel of his Nazi captor’s pistol and refused to say which of his fellow prisoners of war were Jewish, staring evil in the eye and daring the Nazi to shoot. Roddie's act of defiance spared the lives of as many as 200 Jews and the lives of the infantryman under his command.

Inspired by his father’s story, Chris Edmonds embarked on a years-long journey, interviewing surviving POWs under Roddie’s command, and retracing Roddie's footsteps to learn about his unspoken bravery during World War II. Along with New York Times bestselling author Douglas Century, Edmonds takes us to the front lines of this inspiring multi-generational story, revealing in gripping, novelistic detail Roddie’s previously untold heroism—and the lasting effects his bravery had on the lives of thousands, then and now. “What was most remarkable about my journey to discover what my father did during the war,” Chris writes, “was the realization that any one of us has the untapped potential to do something incredibly courageous. We all have the potential to change the world simply by standing up for what’s right.”

Spanning seven decades and linking a sprawling cast of heroes from every corner of the country, No Surrender is an utterly compelling page-turner that recounts major events of World War II and United States Army initiatives that helped the Allies win the war – from the Battle of the Bulge to the massacre at Malmedy to and the now-little-known Army Specialized Training Program, which trained "geeks" or "Quiz Kids" from all over the country—Bob Dole, Kurt Vonnegut, Mel Brooks, and Henry Kissinger among them—to fight the Nazis in the European theater.

A shining example of the transformative and redemptive power of moral courage, No Surrender is a celebration of faith, family, and service, the very characteristics that continue to define us today.


Praise For No Surrender: A Father, a Son, and an Extraordinary Act of Heroism That Continues to Live on Today…

“There’s perhaps no greater untold story to come out of World War II. It’s a heck of a father-son story, but it’s also a tale of the power of one man to do something selfless that forever changes a life.”
— Newsweek

“After his father’s death, Chris Edmonds journeyed across the US and to Germany to discover his father’s heroic past. No Surrender is a quintessential American story of bravery, compassion, and righteousness told by an admiring son.”
— James Bradley, New York Times bestselling author of Flags of Our Fathers

“Roddie Edmonds is a hero for our age—or any age. His story of principled defiance in the face of evil is an inspiration and a challenge. In No Surrender, Chris Edmonds and Douglas Century have given us the one righteous man whose goodness spares us all.”
— Mitchell Zuckoff, New York Times bestselling author of Fall and Rise: The Story of 9/11

“A fascinating war story... a you-are-there portrait of the horrors of war and the incredible effect one selfless person can have on hundreds.”

“In this page-turning memoir, Edmonds and Century chronicle the WWII experiences of Edmond’s late father, Army Master Sgt. Roddie Edmonds…[and] have skillfully transformed war records, interviews, and archival data into a dramatic account…More than a story of brothers in arms, this work is a son’s labor of love.”
— Publishers Weekly (Starred Review)

Chris Edmonds is senior pastor of Piney Grove Baptist Church in Maryville, Tennessee, and chief executive officer of Roddie’s Code, LLC, and The Roddie Edmonds Foundation, organizations committed to extending the legacy and leadership of Master Sergeant Edmonds to future generations. He also teaches Leadership Development to military leaders at the University of Alabama at Huntsville. He earned his bachelor's degree in business at the University of Tennessee and, later, a master's degree in religion at Liberty Theological Seminary. He lives in Maryville, Tennessee, with his wife, Regina.

Douglas Century is an author, journalist, and screenwriter. Co-author of Hunting El Chapo (Harper, 2018), he also co-authored several New York Times bestsellers, including Under and Alone (Random House, 2005) and Takedown: The Fall of the Last Mafia Empire (G. P. Putnam’s Sons, 2002), a finalist for the 2003 Edgar Award in the category of Best Nonfiction Crime Book. He also co-authored If Not Now, When? Duty and Sacrifice In America’s Time of Need (Berkely, 2008), which won the 2010 Colby Award. A veteran investigative journalist, Century is a contributing editor at Tablet magazine and writes regularly for Billboard and The New York Times. He lives in New York City.