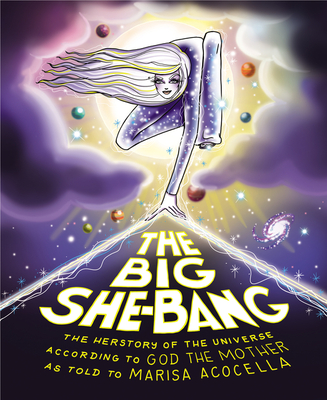 The Herstory of the Universe According to God the Mother

Writing as if in a fever dream, iconic New Yorker cartoonist Marisa Acocella channels God the Mother and all of the goddesses, saints and sinners, and real-life women from our storied past in this epic retelling that begins with the Big She-Bang. The rest, as they say, is herstory.

Hilarious, profound, and (at times) profane, The Big She-Bang is virtuosic storytelling in which the rules are bent back to where they should have started in the first place. It is abundantly clear that the past has been recorded in big books “written by a bunch of men about a bunch of men.” Now Acocella challenges our understanding of humanity’s past with her own Big Book.

Narrated by God the Mother, The Big She-Bang celebrates the Shevolutionaries: a goddess roster that includes Eve, the Marys (Virgin Mother and Magdalene), Persephone, Sophia, Isis, Pope Joan, the Suffragettes, Gloria Steinem, Tarana Burke, Malala, and more. By Klieg-lighting the ways women have been erased, vilified, and dominated across eons—blamed for original sin, destruction, betrayal, witchery, and other assorted (and false) evils and ills—Acocella sets the story straight from the beginning of time to the present day. Not to be exclusionary, this new herstory features cameos from Yaldabaoth, Zeus, Noah, and the Rapacious Phalluses on the rampage. In the end, what hangs in the balance is nothing less than the future of humanity and Mother Earth herself.


Praise For The Big She-Bang: The Herstory of the Universe According to God the Mother…

A perfectly imperfect read for a moment of existential reckoning with masculine conceptions of spirituality, this book gleefully reminds us how much feminine energy lies bubbling underneath patriarchal systems, barely concealed, and nearly ready to burst free. — Library Journal

“Any book that can take us on a gloriously illustrated magic carpet ride through history, mythology, religion, patriarchy, feminism, climate change, rape culture, #MeToo, and even sex between Mary Magdalene and Jesus, and leave us laughing, crying, raising our fists, and devoting the rest of our lives to love and the shevolution, deserves a place in the great libraries of the world. All hail Marisa Acocella!” — Elizabeth Lesser, cofounder of Omega Institute and author of Broken Open and Cassandra Speaks

Marisa Acocella is a cartoonist for The New Yorker whose work has appeared in The New York Times, Glamour, and O, The Oprah Magazine, among other publications. She is the author of the New York Times bestselling graphic novel Ann Tenna (Knopf), Cancer Vixen (Knopf), and Just Who the Hell Is She Anyway? (Crown). Her graphic memoir Cancer Vixen was named one of Time’s top ten graphic memoirs, and a finalist for the National Cartoonists Society Graphic Novel of the Year. A founder and chair of the Marisa Acocella Marchetto Foundation at Mount Sinai Beth Israel Comprehensive Cancer Center and the Dubin Breast Center at Mount Sinai, she lives in New York City.
Loading...
or
Not Currently Available for Direct Purchase