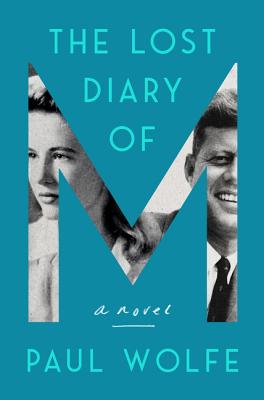 The Lost Diary of M

She was a longtime lover of JFK.

She was the ex-wife of a CIA chief.

She was the sister-in-law of the Washington Post’s Ben Bradlee.

She believed in mind expansion and took LSD with Timothy Leary.

She was a painter, a socialite and a Bohemian in Georgetown during the Cold War.

And she ended up dead in an unsolved murder a year after JFK’s assassination.

The diary she kept was never found.


Praise For The Lost Diary of M: A Novel…

"In real life, Mary Pinchot Meyer had a love affair with JFK, may have done LSD with him and was mysteriously murdered in 1964. Wolfe's riveting novel imagines what Meyer's diary--burned by the CIA after her death--might have revealed. Great fun for conspiracy theorists and romantics alike."
— People

“Devilishly creative.”
— Kitty Kelley author of Jackie Oh! and The Family: The Real Story of the Bush Dynasty

“In this novel that is part love story, part thriller and 100% page turner, Paul Wolfe takes you inside the sexual playgrounds of Cold War Washington, where spooks, secrets and LSD lurk behind every corner…”
— Sally Koslow, author of Another Side of Paradise

"Wolfe gives poignant and poetic voice to... a free spirit and early feminist..What could be easily have been salacious fluff capitalizing on JFK’s sexual proclivities is, instead, a compassionate and intricate portrait of a woman’s psyche. By placing Meyer at the nexus of one of the twentieth century’s definitive eras, Wolfe’s inspired study of a cryptic woman is credible and haunting."
— Booklist (starred review)

“The author deftly simulates a complicated woman's diary, creating a document that feels entirely authentic….. the author includes interesting political and historical details in the entries, shedding light on a woman with a front seat to American history.”
— Kirkus Reviews

"This imagined diary of Mary Pinchot Meyer, socialite and lover of JFK, simmers with intrigue and sensuality, painting in vivid colors both the magnificence and dark underbelly of Camelot"
— Newsweek

“Mary Pinchot Meyer, JFK’s lover, kept a secret diary that vanished after she was murdered in Georgetown in 1964.  In this intriguing novel, Paul Wolfe creatively conjures up the life story she might have written.”
— Meryl Gordon, bestselling author of Bunny Mellon, The Life of American Style Legend and Mrs. Astor Regrets

Paul Wolfe has been an architect, songwriter and multiple-award-winning writer in advertising.  He currently lives in New York City.
Loading...
or support indie stores by buying on