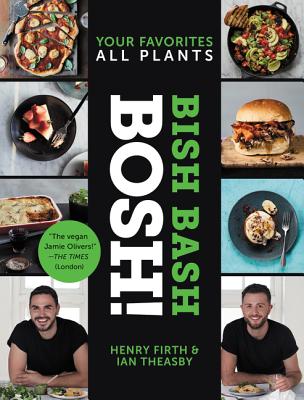 Your Favorites * All Plants (BOSH Series)

BOSH! became widely successful as the biggest and fastest-growing plant-based food channel on the web, reaching over 25 million people a month. Their mission to eat more plant-based foods went mainstream with the publication of their first book, BOSH!, which introduced readers to their fun, crowd-pleasing vegan recipes. Now, the guys from BOSH! are at it again with even more unbelievable vegan recipes.

Filled with more than 120 unmissable new favorite dishes, BISH BASH BOSH! will show readers, vegan or not, how imaginative and easy plant-based food can be. These simple, no-fuss recipes will pack in the flavor with unbelievable results. Recipes will include:

From brilliant breakfasts and easy-prep lunches to weeknight suppers and fantastic feasts, every dish will be a showstopper. Ian and Henry will even include recipes for a completely meat-free Christmas, and a meal prep plan to set yourself up for easy plant-based cooking.

In their follow-up to Bosh!, British vegan vloggers Theasby and Firth expand on their catalogue with 120 new recipes for plant-based dishes. . . sure to fight palate fatigue and expand meal options. . . . This inventive, flavor-packed volume will be a boon for vegans and veggie-lovers alike. — Publishers Weekly

Henry Firth and Ian Theasby are the founders of BOSH, the largest plant-based video channel on Facebook. They both adopted a plant-based lifestyle and in 2016 they started BOSH. In just two years they have generated a following that reaches over 25 million people a month. Best friends, Henry and Ian now live and work together at their BOSH! studio in London.