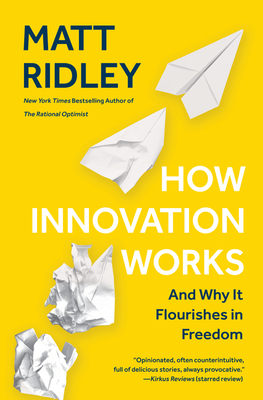 Innovation is the main event of the modern age, the reason we experience both dramatic improvements in our living standards and unsettling changes in our society. Forget short-term symptoms like Donald Trump and Brexit, it is innovation itself that explains them and that will itself shape the 21st century for good and ill. Yet innovation remains a mysterious process, poorly understood by policy makers and businessmen, hard to summon into existence to order, yet inevitable and inexorable when it does happen.

Matt Ridley argues in this book that we need to change the way we think about innovation, to see it as an incremental, bottom-up, fortuitous process that happens to society as a direct result of the human habit of exchange, rather than an orderly, top-down process developing according to a plan. Innovation is crucially different from invention, because it is the turning of inventions into things of practical and affordable use to people. It speeds up in some sectors and slows down in others. It is always a collective, collaborative phenomenon, not a matter of lonely genius. It is gradual, serendipitous, recombinant, inexorable, contagious, experimental and unpredictable. It happens mainly in just a few parts of the world at any one time. It still cannot be modelled properly by economists, but it can easily be discouraged by politicians. Far from there being too much innovation, we may be on the brink of an innovation famine.

“Matt Ridley is one the best non-fiction writers of his generation. He could be described as England’s Yuval Harari...His latest book is a pleasure to read: he carries his considerable learning with an engagingly light touch…Great book. Read it. You’ll be glad you did.” — Forbes Magazine

“Ridley constructs a fascinating theory of innovation, including its prehistoric roots, how it will shape the future and what makes it successful.” — Scientific American

“An insightful and charming exploration of questions that range from the truly profound (How does our species capture energy to stave off decay and death?) to the merely fascinating (Why did it take us so long to invent the wheeled suitcase?).” — Steven Pinker

“A fascinating look at how innovations have shaped the modern age and how the process remains integral to the contemporary world…How Innovation Works is a provocative and necessary read for considering future directions for societies and governments.” — Shelf Awareness

“In this insightful and delightful book, Matt Ridley explores the wondrous causes of innovation, the force that drives our modern economy.  He shows that it’s a team sport, but one that features many colorful stars. It’s a joy to tag along with him as he mines the history of human advances to discover nuggets of useful lessons.”
— Walter Isaacson