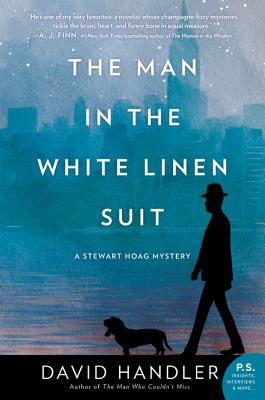 The Man in the White Linen Suit


Praise For The Man in the White Linen Suit: A Stewart Hoag Mystery…

“One of my all-time favorite series…! David Handler is so good at writing one smart, funny page-turner after another that he makes it look easy.” — Harlan Coben

“Hoagy and Lulu tickle your funny bone and touch your heart.” — Carolyn Hart

“David Handler is the master of the sly, comedic mystery.” — Adriana Trigiani

“Kept me turning the pages... The plot is influenced by a range of mystery masters, from Ross Macdonald to Agatha Christie.... The Girl with Kaleidoscope Eyes will help you remember the sun-crazed Hollywood excess of what now seems like an innocent time.” — Seattle Times

“Kaleidoscope Eyes is Handler at his best, drawing us close to his hero and the hero’s beloved pooch, Lulu, while introducing us to some of scuzziest Hollywood characters this side of James Ellroy.” — CTNews.com