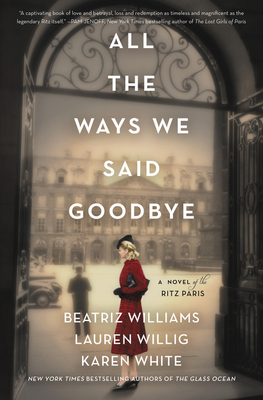 "ALL THE WAYS WE SAID GOODBYE is a superbly plotted lover's knot of passion, regret, and betrayal. Willig, Williams, and White expertly spin three narrative threads across two wars and three generations, grounding their trio of very different heroines in the gilded luxury of the Paris Ritz—a place where anything can happen, even a decades-deferred second chance. Atmospheric, twisty, intriguing to the last page!" — KATE QUINN, New York Times Bestselling Author of The Alice Network

“A sweeping historical novel about the strength of women who find themselves in impossible situations.” — Popsugar

"The Ws have done it again! Combining meticulous research with elegant prose, the result is a captivating book of love and betrayal, loss and redemption as timeless and magnificent as the legendary Ritz itself." — Pam Jenoff, New York Times bestselling author of The Orphan’s Tale

“All three of these “team W” writers create engaging characters and complex relationships while setting a tone that matches the story’s time period…The twist at the center of the story is worth the price of admission on its own. A great choice for anyone looking for clever historical fiction with plenty of drama, action, and surprises in every chapter.” — Library Journal

“Full of heart and intrigue, the authors' latest collaboration captures women's perseverance and how history connects us all.” — Booklist

“For most people, staying at a grand hotel is a rare treat. It’s a time to indulge in luxury, to be catered to with impeccable service and to forget about the outside world until check-out. It’s not unlike the experience a reader gets when reading All the Ways We Said Goodbye.” — The Atlanta Journal-Constitution

“An elegantly scripted and multi-layered novel that showcases the three co-author's impressive literary skills with narrative driven storytelling, All the Ways We Said Goodbye . . . is an inherently fascinating, multi-generational read from beginning to end.” — Midwest Book Review

“Three historical fiction powerhouses combine efforts to create an enthralling adventure spanning from the onset of World War I to the 1960s, telling the story of three women and their stay at the famous Ritz Hotel in Paris.” — Book Riot

“Well-researched and cohesively written, this historical novel reflects the strength of these women as they struggle to survive during turbulent times.” — Orange County Register

"This triumvirate of historical fiction writers team up once again to tell the stories of three very different women whose lives intertwine across the decades in Paris’ legendary Ritz Hotel." — The Palm Beach Post