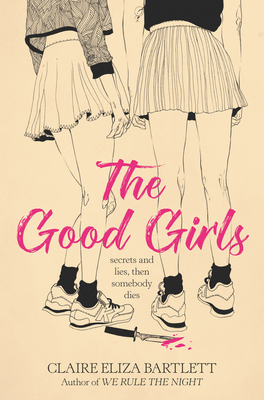 “Who killed Emma? Was it the perfect, popular, and beautiful cheerleader? The suspects at Emma’s high school are like those at every other high school — except one of them is the killer. Nothing is as it seems in this page-turner, which you will want to share with your nemesis and friends!”
— Suzanne Lucey, Page 158 Books, Wake Forest, NC
View the List

One of Us Is Lying meets Sadie in this twisty, feminist thriller for the Me Too era.

The troublemaker. The overachiever. The cheer captain. The dead girl. Like every high school in America, Jefferson-Lorne High contains all of the above.

After the shocking murder of senior Emma Baines, three of her classmates are at the top of the suspect list: Claude, the notorious partier; Avery, the head cheerleader; and Gwen, the would-be valedictorian.

But appearances are never what they seem. And the truth behind what really happened to Emma may just be lying in plain sight. As long buried secrets come to light, the clock is ticking to find Emma's killer—before another good girl goes down.


Praise For The Good Girls…

"This clever thriller lures you in, then hits you where it hurts—with shocking power.”  — Dylan Farrow, #MeToo activist and author of Hush

"An interrogation of the ways in which society labels girls to make it easier to overlook, brush off, or directly deny evidence of sexual abuse and trauma." — Bulletin of the Center for Children’s Books

"Brimming with suspense, along with a compelling cast of suspects, Bartlett’s latest offers up a gripping, page-turning mystery about small town secrets and the reasons girls keep them." — Stephanie Kuehn, Morris Award-winning author of Charm & Strange

"Beautiful and powerful, The Good Girls is a revelation. I couldn't stop until the breathless end, and it's been haunting me in the days since I finished. Full of dark secrets and twists you won't see coming, this one will keep you in its grip long after the last page." — Sarah Lyu, author of The Best Lies

Praise for We Rule the Night: “A fierce and compelling breakout debut that should not be missed.“ — Kirkus Reviews (starred review)

“A breathless series starter from a new voice to watch.” — Booklist (starred review)

“An empowering story about the power of female friendships that questions the blind loyalty associated with patriotism and provides insight into the role that women have actively played in battle.” — Bulletin of the Center for Children’s Books

Claire Eliza Bartlett is a writer and tour guide in Copenhagen, Denmark. She was born in the US but left when she was eighteen to travel through Europe, where she found a home with a husband and too few cats. She can be found on social media as @bartlebett or at www.authorclaire.com.