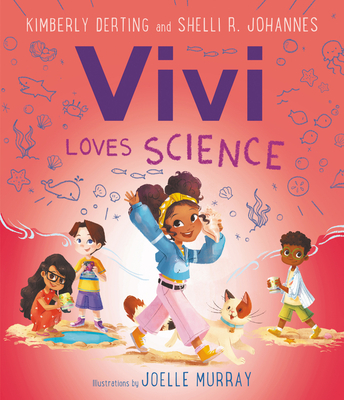 Vivi loves science! In this STEM-themed picture book, part of a series about girls who love science, Vivi and her classmates go on a field trip to the ocean to investigate tide pools. A must-have for fans of Rosie Revere, Engineer and What Do You Do with an Idea? and anyone who loves to ask questions and learn about the world. Features a glossary and fun tide pool activity to do at home.

In the companion to Cece Loves Science and Libby Loves Science, Vivi and her classmates take a field trip to the beach to study tide pools. With help from her teacher and a park ranger, Vivi and her friends make aquascopes, participate in a marine-inspired scavenger hunt, and learn about different species that call the ocean home.

At the end of their trip, there’s one more surprise for Vivi! Full of fun facts about marine biology and conservation, Vivi Loves Science is a perfect pick for aspiring scientists, classrooms, and fans of Andrea Beaty’s Ada Twist, Scientist.

Features a glossary and instructions on how to make your own aquascope and tide pool at home.

“Fans of the series that began with CeCe Loves Science will enjoy this beach-themed exploration. . . . The brightly colored images rival those of Dreamworks or Disney in cuteness and charm while also providing information. . . . A nifty way to help young learners see the beach through the lens of science.” — Kirkus Reviews