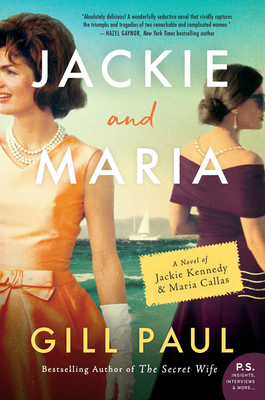 From the #1 bestselling author of The Secret Wife comes a story of love, passion, and tragedy as the lives of Jackie Kennedy and Maria Callas are intertwined—and they become the ultimate rivals, in love with the same man.

The President's Wife; a Glamorous Superstar; the rivalry that shook the world...

Jackie Kennedy was beautiful, sophisticated, and contemplating leaving her ambitious young senator husband. Life in the public eye with an overly ambitious--and unfaithful—man who could hardly be coaxed to return from a vacation after the birth of a stillborn child was breaking her spirit. So when she's offered a holiday on the luxurious yacht owned by billionaire Ari Onassis, she says yes...to a meeting that will ultimately change her life.

Maria Callas is at the height of her operatic career and widely considered to be the finest soprano in the world. And then she's introduced to Aristotle Onassis, the world’s richest man and her fellow Greek. Stuck in a childless, sexless marriage, and with pressures on all sides from opera house managers and a hostile press, she finds her life being turned upside down by this hyper-intelligent and impeccably charming man...

Little by little, Maria’s and Jackie’s lives begin to overlap, and they come closer and closer until everything they know about the world changes on a dime.


Praise For Jackie and Maria: A Novel of Jackie Kennedy & Maria Callas…

“For those of us who thought we knew all about these public and private scandals, and for others just coming to this modern tell-all Greek tragedy, Jackie and Maria is a deep dive into glitz, glamour, and heartbreak. Gill Paul’s emotionally turbulent, amazing novels never disappoint.”
— Karen Harper, New York Times bestselling author of The Queen's Secret

"Jackie and Maria is an intriguing behind-the-scenes look at the rivalry between two of the world's most glamorous women, both of whom snared the attention of Aristotle Onassis, one of the world's richest and most mesmerizing men. Fans of the Kennedys will love this introduction to Maria Callas!"
— Stephanie Thornton, USA Today bestselling author of And They Called It Camelot

“Gill Paul weaves together the lives of two fascinating and flawed icons... A dishy and delectable novel, Jackie and Maria, is sure to please readers with its famous cast of characters from John F. Kennedy to Aristotle Onassis, its taut pacing, and a truly absorbing story.”
— Heather Webb, USA Today Bestselling Author

"Glamorous and highly seductive, this compelling story explores the lives of two complex, powerful women complete with all their talents and flaws. Jackie and Maria is not just about their story; this novel also brings the 20th century to life in vivid, colorful detail. I loved it.”
— Dinah Jefferies, #1 Sunday Times bestselling author

"Gill Paul weaves together the competing and complementary lives of Jackie Kennedy and Maria Callas into a rich tapestry in this absorbing, romantic novel. Impossibly chic and fiercely independent, both women commanded my attention from the first page, and I applauded them both to the last."
— Kerri Maher, author of The Girl in White Gloves and The Kennedy Debutante

“Two of the most famous and glamorous women of the mid-20th century fall in love with one of the world’s richest men: the scene is set for a drama of vicious rivalry and broken hearts… a truly compelling story keeping you gripped from (fairly) innocent beginnings to tragic endings…This is the best of historical fiction – leaving you wanting to learn more.”
— Liz Trenow, author of The Hidden Thread

"The novel brilliantly evokes the world of the jet-set, rich and famous of the sixties so well I felt I was living it all alongside them."
— Kathleen McGurl, author of The Drowned Village and The Stationmaster’s Daughter

"With Jackie and Maria Gill Paul has cleverly tapped into the zeitgeist for reframing women's history...This is beautiful, tender and humane storytelling."
— Kate Thompson, author of Secrets of the Homefront Girls and the Stepney Doorstep Society

"Gill Paul is always meticulous in her historical research for novels, and always brings the characters so vividly to life...This novel is simply stunning."
— Louise Beech, author of Call Me Star Girl and The Mountain in My Shoe

"[A] delectable new novel...about the lives and romantic rivalry of two female icons—such a juicy pageturner!"
— Kris Waldherr, author of The Lost History of Dreams

"I loved Gill's brilliant Jackie and Maria. I was completely enthralled, wholly swept up in the characters, the glamour, and the fascinating story of these iconic women. For me, it was an utter treat from beginning to end..."
— Jenny Ashcroft, author of Last Letter to Bombay

“Heartbreaking. Brilliant. Powerful. Its intensity and perception knocked me out. I guarantee that this fascinating love-triangle story will have you enthralled. The passion and pain of two strong female icons of the twentieth century sent shivers through me with every page. Superb storytelling. Gill Paul at her best.”
— Kate Furnivall, author of Guardian of Lies and The Betrayal

"I just loved being swept into the lives and loves – and steamy affairs! – of Jackie Kennedy and Maria Callas. A fabulous book. Bravo, Gill!"
— Eve Chase, author of The Daughters of Foxcote Manor and Black Rabbit Hall

"A compelling and fascinating story about powerful personalities played out against an intriguingly political and glamorous backdrop."
— Rosanna Ley, author of The Lemon Tree Hotel

"Being aboard Onassis’ yacht with a glass of champagne was just what I needed. Addictive and so well-researched."
— Kate Riordan, author of The Heatwave

“An intoxicating mix of glamour, scandal and fascinating insight into the lives of the super-rich and a superb character study of two of the 20th century’s most iconic women – and the man they both loved.”
— Rachel Rhys, author of Fatal Inheritance and Island of Secrets

"[An] irresistible tale...Paul shines in the small details about her larger-than-life characters... Paul’s pitch-perfect ear for dialogue, elegant prose, and sound plotting combine to create a sensational and spellbinding package."
— Publishers Weekly