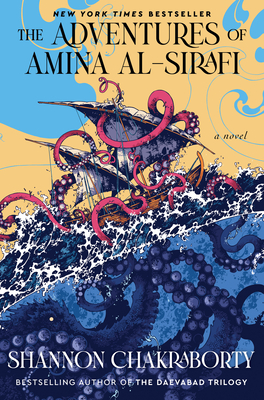 The Adventures of Amina al-Sirafi

Shannon Chakraborty, the bestselling author of The City of Brass, spins a new trilogy of magic and mayhem on the high seas in this tale of pirates and sorcerers, forbidden artifacts and ancient mysteries, in one woman’s determined quest to seize a final chance at glory—and write her own legend.

Amina al-Sirafi should be content. After a storied and scandalous career as one of the Indian Ocean’s most notorious pirates, she’s survived backstabbing rogues, vengeful merchant princes, several husbands, and one actual demon to retire peacefully with her family to a life of piety, motherhood, and absolutely nothing that hints of the supernatural.

But when she’s tracked down by the obscenely wealthy mother of a former crewman, she’s offered a job no bandit could refuse: retrieve her comrade’s kidnapped daughter for a kingly sum. The chance to have one last adventure with her crew, do right by an old friend, and win a fortune that will secure her family’s future forever? It seems like such an obvious choice that it must be God’s will.

Yet the deeper Amina dives, the more it becomes alarmingly clear there’s more to this job, and the girl’s disappearance, than she was led to believe. For there’s always risk in wanting to become a legend, to seize one last chance at glory, to savor just a bit more power…and the price might be your very soul.


Praise For The Adventures of Amina al-Sirafi: A Novel…

“With musical prose, majestic settings, and an epic story, Chakraborty’s finale to a trilogy will ignite passion in her many fans. Fervidly recommended to all readers of the fantasy genre.” — Booklist (starred review) on Empire of Gold

“The centuries-long power struggle for the magical kingdom of Daevabad comes to a head in this marvelous final adventure in Chakraborty’s Daevabad trilogy...This mammoth finale is a worthy finish to a beloved series.”  — Publishers Weekly on Empire of Gold

“Chakraborty writes a winning heroine in Nahri—flawed but smart and engaging. And her portrayal of the cultural conflicts in the magical city of Daevabad and of Ali’s inner turmoil is compelling and complex, serving as a strong counterpoint to the thrilling action.” — Washington Post on The City of Brass

“The City of Brass reads like an invitation for readers from Baghdad to Fairbanks to meet across impossibly divergent worlds through the shared language and images of the fantastical.” — New York Times Book Review

Shannon Chakraborty is the author of the critically acclaimed and internationally bestselling Daevabad Trilogy. Her work has been translated into over a dozen language and nominated for the Hugo, Locus, World Fantasy, Crawford, and Astounding awards. You can find her online at www.sachakraborty.com or on Instagram and Twitter as @SAChakrabooks.