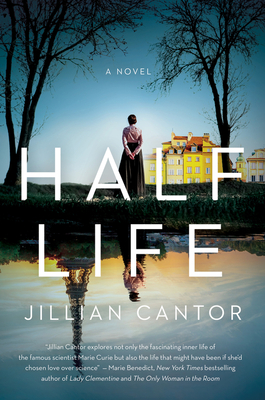 The USA Today bestselling author of In Another Time reimagines the pioneering, passionate life of Marie Curie using a parallel structure to create two alternative timelines, one that mirrors her real life, one that explores the consequences for Marie and for science if she’d made a different choice.

In Poland in 1891, Marie Curie (then Marya Sklodowska) was engaged to a budding mathematician, Kazimierz Zorawski. But when his mother insisted she was too poor and not good enough, he broke off the engagement. A heartbroken Marya left Poland for Paris, where she would attend the Sorbonne to study chemistry and physics. Eventually Marie Curie would go on to change the course of science forever and be the first woman to win a Nobel Prize.But what if she had made a different choice?


What if she had stayed in Poland, married Kazimierz at the age of twenty-four, and never attended the Sorbonne or discovered radium? What if she had chosen a life of domesticity with a constant hunger for knowledge in Russian Poland where education for women was restricted, instead of studying science in Paris and meeting Pierre Curie?

Entwining Marie Curie’s real story with Marya Zorawska’s fictional one, Half Life explores loves lost and destinies unfulfilled—and probes issues of loyalty and identity, gender and class, motherhood and sisterhood, fame and anonymity, scholarship and knowledge. Through parallel contrasting versions of Marya’s life, Jillian Cantor’s unique historical novel asks what would have happened if a great scientific mind was denied opportunity and access to education. It examines how the lives of one remarkable woman and the people she loved – as well as the world at large and course of science and history—might have been irrevocably changed in ways both great and small.

Praise For Half Life: A Novel…

"Jillian Cantor's beautifully written Half Life is a poignant exploration of ambition, family, gender, and love. I couldn't put down this tender, nuanced, and inspiring novel. This is a book for anyone who's ever been torn by conflicting passions and loyalties; in other words, this is a book for all of us. A dazzling must-read."
— Jean Kwok, New York Times bestselling author of Searching for Sylvie Lee and Girl in Translation

"In her riveting new novel, Half Life, Jillian Cantor explores not only the fascinating inner life of the famous scientist Marie Curie but also the life that might have been if she’d chosen love over science in her early years, a determination that would have irrevocably altered the face of science and history. This thoughtful, compelling story delves into issues faced by modern women, while inviting readers to ruminate on their own life choices and the domino-effect of those decisions."
— Marie Benedict, New York Times bestselling author of Lady Clementine and The Only Woman in the Room

“Cantor has created an absorbing biographical novel and performed an engaging riff on the “what if” ponderings we all experience."
— Booklist

"In a time when many of us are more tuned in to scientific advances than we've ever been before, this reimagining of what might happen if pioneering scientist Marie Curie had taken a different path is just what the doctor ordered."
— Good Housekeeping

Jillian Cantor is the author of award-winning and bestselling novels for adults and teens, including In Another Time, The Hours Count, Margot, and The Lost Letter, which was a USA Today bestseller. She has a BA in English from Penn State University and an MFA from the University of Arizona. Cantor lives in Arizona with her husband and two sons.

1. You have a choice. There is always a choice. This refrain is echoed throughout the book, both by Maryaand Marie. Do you agree or disagree with this sentiment? Do you believe Marya and Marie both truly have choices? Why or why not?

2. Marya’s life splits into two versions in 1891 when she makes one simple choice: she decides to get on the train to Paris to further her education. Or she stays in Poland and marries Kaz. What do you believe is the greatest impact of this one choice on Marya’s life? On Marie’s? What about on the world as a whole? On science?

4. Marya and Marie are technically the same person, and yet many of their choices and actions diverge in different ways throughout the novel. Discuss the ways in which their characters are ultimately similar. Different?

5. Both Marie and Marya have an important relationship with Pierre Curie. How does the scope of Pierre’s life, and work, change in each woman’s story? What is the importance of Pierre as a character throughout the novel?

6. What is most important in Marie’s life: love or science? What about in Marya’s? Which woman has the better love story? Which woman made the greatest contribution to science?

7. Both Marie and Marya say, “My body was not built to carry a baby.” But how is pregnancy ultimately different for each of them, based upon their circumstances? Who becomes a better mother, Marya or Marie? How and why does Klara turn out differently than Irene and Eve?

8. In Marie’s story line, Leokadia marries Kaz but gives up her piano career. In Marya’s, Leokadia pursues piano professionally and never marries, but she is still drawn to Kaz. Which life is a better life for her? Why do you think she still finds her way to Kaz in both storylines?

9. Near the end, Marya clings to her sisters’ hands and says they are “three old women, forever connected to one another by blood and by love. And yes, by science, too.” Marie is similarly connected to her sisters at the end of her life. But Bronia’s and Hela’s lives turn out drastically different in the two storylines. Compare and contrast their lives in both stories. Discuss which storyline is better for Bronia? For Hela? How do Marya’s actions irrevocably change her sisters’ lives, in ways both good and bad?

10. From Poland to Paris to the rocky cliffs of Brittany to the front lines of WWI –what role does setting play in the novel? How does the setting help inform and shape Marya’s life differently from Marie’s?

11. In the very end, Eve plays piano for Marie and Klara plays it for Marya. What role does music play both here and throughout the book? How is the piano both different and the same for Marie and for Marya?

12. The book opens and closes with Marie on her deathbed, examining the choices she made in her personal life: love, marriage, education, motherhood. But in the very end she thinks that radium is everything, the only thing.What do you think she means by this? What is the importance of radium in both Marie’s life and her death? How is this different in Marya’s story?

13. Marya thinks that Half Life is such a funny term, so unscientific. While Marie thinks in the end that the Half Life of radium is 1600 years, that her radium will long outlive her. Why is the novel called Half Life? Discuss both the scientific and personal significance of that term for Marya and for Marie.