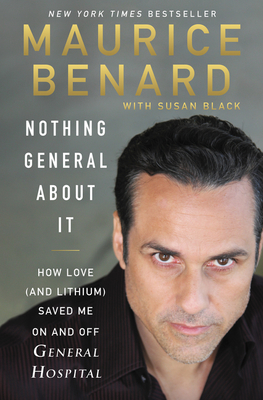 Nothing General About It

How Love (and Lithium) Saved Me On and Off General Hospital

The Emmy Award-winning star of General Hospital chronicles his astonishing and emotional life journey in this powerful memoir—an inspiring story of success, show business, and family, and his struggle with mental illness.

Maurice Benard has been blessed with family, fame, and a successful career. For twenty-five years, he has played one of the most well-known characters on daytime television: General Hospital’s Michael “Sonny” Corinthos, Jr. In his life outside the screen, he is a loving husband and the father of four. But his path has not been without hardship. When he was only twenty, Maurice was diagnosed with bipolar disorder.

In Nothing General About It, Maurice looks back to his youth in a small town and his tenuous relationship with his father. He describes how his bipolar disorder began to surface in childhood, how he struggled to understand the jolting mood swings he experienced, and how a doctor finally saved his life. For years Maurice was relentless in his goal to be a successful actor. But even after he “made it,” he still grappled with terrifying lows, breakdowns, and setbacks, all while trying desperately to maintain his relationship with his wife, who endured his violent, unpredictable episodes. Maurice holds nothing back as he bravely talks about what it was like to be medicated and institutionalized, and of how he learned to manage his manic episodes while on the set of GH.

Nothing General About It is also an incredible love story about an enduring marriage that demonstrates what those vows—for better, for worse, in sickness and in health—truly mean. Maurice also pays tribute to the community that has been there for him through thick and thin, and ruminates on the importance of both inherited and created family.

A shocking, riveting, and utterly candid memoir of love, adversity, and ultimately hope, Nothing General About It offers insights and advice for everyone trying to cope with mental illness, and is a motivational story that offers lessons in perseverance—of the importance of believing in and fighting for yourself through the darkest times.

Nothing General About It includes a 16-page insert featuring approximately 50 photographs.


Praise For Nothing General About It: How Love (and Lithium) Saved Me On and Off General Hospital…

"An intriguing read for soap fans and an uplifting read for anyone struggling with mental illness."
— Booklist

"Benard’s honest work is realistic yet inspiring. Soap opera fans will relish the behind-the-scenes insight, but overall this will resonate with anyone attempting to overcome life’s hurdles."
— Library Journal

"A man I’m proud to call my friend is owed a debt of gratitude for taking us inside the roller-coaster ride that has been his life, shining a light on mental illness and how he rose to heights from that abyss. More importantly, he reminds us of how no struggle is too great to overcome—if you value life, love and all the challenges that come with them. This book is a must-read. Impossible to want to put down."
— Stephen A. Smith, ESPN

"This is a heartfelt, inspiring, and brutally honest look in the mirror chronicling his experience with mental illness, finally finding the right diagnosis, and learning how to live with it."
— Dr. Drew Pinsky

"In this gripping and extremely informative memoir, Maurice Benard exposes his candid fight with bipolar disorder and years of suffering while achieving phenomenal, award-winning success as an actor. His book will hit home with so many readers as Benard offers tremendous hope."
— Victoria Gotti, New York Times bestselling author

"Maurice and Susan's Nothing General About It is gut-wrenching. It's an honest look at one man’s private pain and an unconventional and inspiring love story."

"I’m so proud of Maurice for having the courage to put his story forward—now it’s up to all of us to learn from it and use it to expand awareness around mental health."
— Kurt Bardella, USA Today & NBC News THINK contributor

Maurice Benard, the longtime star of ABC soap opera General Hospital, is a two-time Emmy Award–winning film and television actor, a member of the prestigious Actors Studio, and an advocate for mental health awareness. He lives in California with his wife, Paula, with whom he proudly raised three daughters and a son—who is already following in his father’s footsteps as an actor.