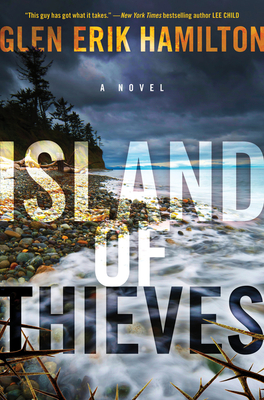 When a new security gig turns into a setup, expert thief Van Shaw finds himself the prey in a cross-country pursuit—in this electrifying sixth novel in Glen Erik Hamilton’s pulse-pounding and emotionally resonant thriller series.

Van Shaw is hired to evaluate the safeguards for the art collection of eccentric business magnate Sebastien Rohner. Then Rohner reveals to Van the real reason he’s been recruited: to prevent another professional burglar from stealing the art. Rohner wants to set a thief to catch a thief.

While questioning the bizarre nature of the job, Van accepts the lucrative offer and arrives at the island estate during an international summit that Rohner is hosting. Shortly after beginning his surveillance of Rohner’s highly secure gallery wing, Van stumbles across the murdered body of one of the honored guests along the rocky shore. Wary of Rohner’s true intentions, Van knows the homicide detectives on the case—and perhaps Rohner as well—think he’s the prime suspect and will turn his life upside down in their search for proof.

Van begins to hunt for the killer himself, but scrutiny only digs his hole deeper, as one of Rohner’s own executives is then killed and the Seattle police find concrete evidence placing Van at the scene. With no other options, he goes on the run, alone and unaided. He’s hunted by the cops, the enraged Rohner, and a pair of psychopathic hitmen who chase Van from one coast to the next. To clear his name, Van Shaw will have to uncover the hidden motive of corporate espionage at a global level, even with a band of killers on his tail who are determined to add Van to their growing list of victims.


Praise For Island of Thieves: A Novel…

"Hamilton has written his best “Van Shaw” book to date with this slow-burn tale that takes his main character in unexpected directions. Van is torn between wondering whom he can trust and keeping his known allies safe. High stakes, a genuinely complex plot, compelling characters, and excellent writing make this another winner from Hamilton. Fans of Daniel Silva and Gregg Hurwitz should add Van Shaw to their list of go-to characters" — Library Journal (starred review)

"The island of thieves is poised for a reenactment of Lord of the Flies. As ever, Van proves to be a wry, reliable guide through the relentless action of Hamilton’s always thrilling series." — BookPage

“Van Shaw is one of the most interesting and loyal heroes in fiction today. Once again, Hamilton pens a complex, twisty tale that may be Shaw’s most dangerous—and emotional—case to date. Atmospheric and taut, A Dangerous Breed is a winner.” — Allison Brennan, New York Times bestselling author

“Glen Erik Hamilton offers readers a thriller tour de force. In A Dangerous Breed, the past collides violently with the present, and the result is a Pandora’s box of secrets spilled open. It’s taut, it’s compelling, and it’s so well written it’ll make other authors jealous. But here’s the kicker: At its core, it’s really all about family, and what could be more heartwarming? This is a bulldog of a story that, once it’s set its teeth in you, refuses to let go.”  — William Kent Krueger, New York Times bestselling author

“From the first page, you'll know you’re in for a thrilling ride! This is vivid and powerful writing that maintains its verve till the very end.”  — Tess Gerritsen, New York Times bestselling author, on Dangerous Breed

“Van Shaw, one of the most interesting protagonists in thrillers today, learns long-hidden truths about himself in this latest series entry, which combines tense and twisty action with some subtle reflections on the nature of family. Glen Erik Hamilton proves himself a master.”  — Joseph Finder, New York Times bestselling author, on Dangerous Breed

“This guy has got what it takes.” — Lee Child, New York Times bestselling author

A native of Seattle, GLEN ERIK HAMILTON was raised aboard a sailboat and grew up around the marinas and commercial docks and islands of the Pacific Northwest. His novels have won the Anthony, Macavity, and Strand Critics awards, and have been nominated for the Edgar, Barry, and Nero awards. After living for many years in Southern California, he and his family have recently returned to the Emerald City and its beautiful overcast skies.