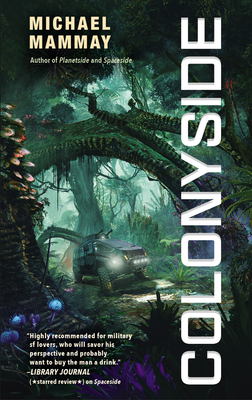 A missing scientist and deep pockets pull Colonel Carl Butler out of retirement, investigating another mystery that puts him and his team--and the future of relations with alien species--in danger in COLONYSIDE, the exciting follow-up to Planetside and Spaceside.

Carl Butler was once a decorated colonel. Now he’s a disgraced recluse, hoping to live out the rest of his life on a backwater planet where no one cares about his “crimes” and everyone leaves him alone.

A CEO’s daughter has gone missing and he thinks Butler is the only one who can find her. The government is only too happy to appease him. Butler isn’t so sure, but he knows the pain of losing a daughter, so he reluctantly signs on. Soon he’s on a military ship heading for a newly-formed colony where the dangerous jungle lurks just outside the domes where settlers live.

Paired with Mac, Ganos, and a government-assigned aide named Fader, Butler dives head-first into what should be an open and shut case. Then someone tries to blow him up. Faced with an incompetent local governor, a hamstrung military, and corporations playing fast and loose with the laws, Butler finds himself in familiar territory. He’s got nobody to trust but himself, but that’s where he works best. He’ll fight to get to the bottom of the mystery, but this time, he might not live to solve it.

"Highly recommended for readers who like their heroes cynical, their mystery twisted, and their sf thought-provoking." — Library Journal (starred review)