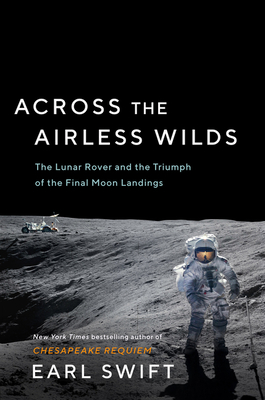 Across the Airless Wilds

The Lunar Rover and the Triumph of the Final Moon Landings

A "brilliantly observed" (Newsweek) and "endlessly fascinating" (WSJ) rediscovery of the final Apollo moon landings, revealing why these extraordinary yet overshadowed missions—distinguished by the use of the revolutionary lunar roving vehicle—deserve to be celebrated as the pinnacle of human adventure and exploration.

8:36 P.M. EST, December 12, 1972: Apollo 17 astronauts Gene Cernan and Jack Schmitt braked to a stop alongside Nansen Crater, keenly aware that they were far, far from home. They had flown nearly a quarter-million miles to the man in the moon’s left eye, landed at its edge, and then driven five miles in to this desolate, boulder-strewn landscape. As they gathered samples, they strode at the outermost edge of mankind’s travels. This place, this moment, marked the extreme of exploration for a species born to wander.

A few feet away sat the machine that made the achievement possible: an electric go-cart that folded like a business letter, weighed less than eighty pounds in the moon’s reduced gravity, and muscled its way up mountains, around craters, and over undulating plains on America’s last three ventures to the lunar surface.

In the decades since, the exploits of the astronauts on those final expeditions have dimmed in the shadow cast by the first moon landing. But Apollo 11 was but a prelude to what came later: while Neil Armstrong and Buzz Aldrin trod a sliver of flat lunar desert smaller than a football field, Apollos 15, 16, and 17 each commanded a mountainous area the size of Manhattan. All told, their crews traveled fifty-six miles, and brought deep science and a far more swashbuckling style of exploration to the moon. And they triumphed for one very American reason: they drove.

In this fast-moving history of the rover and the adventures it ignited, Earl Swift puts the reader alongside the men who dreamed of driving on the moon and designed and built the vehicle, troubleshot its flaws, and drove it on the moon’s surface. Finally shining a deserved spotlight on these overlooked characters and the missions they created, Across the Airless Wilds is a celebration of human genius, perseverance, and daring.


Praise For Across the Airless Wilds: The Lunar Rover and the Triumph of the Final Moon Landings…

"In his compelling history of the rover’s place in the space program, Across the Airless Wilds, Earl Swift writes that, during Apollo 15, 16 and 17, astronauts drove it over 56 miles. … Such are Mr. Swift’s narrative talents and the bounties of the source material that the book is a joy to read from beginning to end. … Swift has reminded readers of an endlessly fascinating chapter in space exploration with widespread implications for the future." — Wall Street Journal

“Swift relays the awe-inspiring story of Apollo 17 and the lunar vehicle in a way that makes it all feel brand new. From the sheer human ingenuity of the moon missions to the deeply human figures inside the space suits, this book is a brilliantly observed homage to the human spirit.” — Newsweek

“The literature of lunar exploration has tended to focus on the earlier Apollo missions, with scant attention paid to the extraordinary achievements of the later rover expeditions—which were, in many respects, scientifically bolder and taught us a great deal more about our moon. Earl Swift lays out this great unsung saga with verve and magisterial sweep. After reading Across the Airless Wilds, you’ll begin to think of NASA's true golden age not in terms of ‘one small step,’ but as a series of cosmic car rides." — Hampton Sides, author of In the Kingdom of Ice

"Such an enjoyable book. ... A clear and compelling story. ... Ingenious. ..Up-end[s] the Apollo narrative entirely so that every earlier American venture into space was preparation for the last three trips to the moon. ... [A] detailed, thrilling account. ... Swift conveys the baffling, unreadable lunar landscape very well, but Across the Airless Wilds is above all a human story, and a triumphant one at that." — The Times (London)

“Swift details the story of the development of the lunar rover, focusing in particular on three pioneering engineers who made the craft a reality. … Swift ably outlines their achievements in technology and project management, clarifying complex issues in layperson’s language. Even those who think they already know plenty about America’s space program will find deeper insights here.”  — Booklist (starred review)

“In Across the Airless Wilds, Earl Swift skillfully tells the remarkable story of how vision, ingenuity, and some pretty fine engineering transformed lunar and planetary exploration.  A rare and compelling celebration of the human spirit.”  — Andrew H. Knoll, professor of Earth and Planetary Science at Harvard University; member of the science team of NASA’s Mars Exploration Rover mission; and author of A Brief History of Earth

“This is not just a book about the lunar rover—it’s also a book about humans, and the great things they can do when inspired. There are people here who jump off the page—and sometimes, off the moon’s surface. Vividly written, engaging, and fascinating. I started it one day and finished it the next, and I’m not a fast reader. I just didn’t want to stop.” — James Donovan, author of Shoot for the Moon: The Space Race and the Extraordinary Voyage of Apollo 11

"For the origins and history of the Apollo lunar rover, there is no better guide than Earl Swift's beautifully written book. It details two decades of rover concepts, followed by two frantic years of building one for Apollo on a ridiculous schedule and an inadequate budget. But it paid off in three spectacular landings that used the rover for science—Apollos 15, 16, and 17. Swift also profiles the people who accomplished this feat; they are as fascinating as the machine itself.” — Michael J. Neufeld, Senior Curator, Space History Department, Smithsonian National Air and Space Museum, and author of Von Braun: Dreamer of Space, Engineer of War

"Swift's attention to historical detail in setting the scene for the events he covers in Across the Airless Wilds is what helps to make the book so compelling. It’s well-researched, well-written, and revelatory.  — Forbes

"Nearly obscured by earlier Moon landings – especially Apollo 11 – Apollo missions 15, 16 and 17 had the most significant scientific and exploration return of all their predecessors. Their astronauts stayed longer on the Moon and went further to collect samples and conduct experiments – courtesy of the remarkable lunar roving vehicle, LRV. These lunar excursions 50-or-so years ago in fact mark the apogee of human exploration – no humans have been as far from the Earth since. Earl Swift’s new book Across the Airless Wilds examines the triumph of these missions and of their LRVs, the engineering marvel that made the difference." — Cosmos

“50 years ago this month, American automobile culture landed on the moon. A book by Earl Swift looks at NASA’s Lunar Roving Vehicles, and how they really opened up the moon for the later group of Apollo astronauts.” — New York Times

"Here’s a book that salutes those who were looking ahead. Across the Airless Wilds pays tribute to the bright minds that conceptualized, designed and eventually engineered the lunar rovers. ... An enjoyable read." — Fredericksburg Free Lance-Star

"With Across the Airless Wilds Swift has illuminated an underappreciated marvel of engineering and created a fabulous summer read. The entire second half of his book is a riveting travelogue of six astronauts’ “lunar road trips” drawn from interviews and radio transcripts, augmented by priceless color photos that alone are worth the price of the book." — Virginian Pilot

"In his meticulously researched and masterfully written new book, Across the Airless Wilds, Earl Swift tells the story of the lunar-vehicle program from its inception in the mind of ex-Nazi Wernher von Braun to the three rover excursions." — Road & Track

"Full of intrigue. ... The latest by Swift will especially appeal to all those interested in U.S. space programs and anyone seeking a well-written story of action and adventure." — Library Journal

"Remarkable. ... The informative and fascinating narrative shines a spotlight on these often-overlooked yet crucial missions and introduces you to some of the captivating characters who helped to make it all possible. Across the Airless Wilds is a true celebration of human brilliance and technological advancement." — All About Space

Journalist Earl Swift has written seven books and hundreds of major features for newspapers and magazines, all distinguished by evocative language and deeply immersive reporting. Since 2012, he has been a fellow of Virginia Humanities at the University of Virginia. Swift has a 26-year-old daughter, Saylor, who is his neighbor in the Blue Ridge mountains west of Charlottesville.