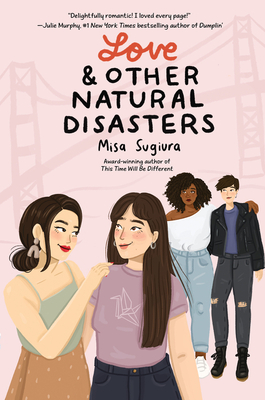 This delightfully disastrous queer YA rom-com is a perfect read for fans of Jenny Han, Morgan Matson, and Sandhya Menon.

When Nozomi Nagai pictured the ideal summer romance, a fake one wasn’t what she had in mind.

That was before she met the perfect girl. Willow is gorgeous, glamorous, and…heartbroken? And when she enlists Nozomi to pose as her new girlfriend to make her ex jealous, Nozomi is a willing volunteer.

Because Nozomi has a master plan of her own: one to show Willow she’s better than a stand-in, and turn their fauxmance into something real. But as the lies pile up, it’s not long before Nozomi’s schemes take a turn toward disaster…and maybe a chance at love she didn’t plan for.


Praise For Love & Other Natural Disasters…

Praise for This Time Will Be Different: “Sugiura tackles an abundance of topics with finesse, including social and economic injustice, allyship, and feminism, simultaneously breaking down the Asian-American immigration narrative and the myth of the model minority. Essential.”
— Kirkus Reviews (starred review)

“With intelligent dialogue surrounding diversity, representation and responsible social action, This Time Will Be Different is a timely, smart novel that readers of contemporary teen fiction will likely devour.”
— Shelf Awareness

“Sugiura deftly weaves historical fact into this coming-of-age narrative, providing an entertaining and informative backdrop that allows CJ to explore her own sense of identity while giving readers a front seat to her process.”
— Publishers Weekly (starred review)

Praise for It's Not Like It's a Secret:  “The graceful complexity of this first-person narrative is an accomplishment in itself. Sana is a fully realized protagonist with faults and unacknowledged privilege alongside her nuanced experience of identity and “model minority” racism. Sugiura thoughtfully explores intersecting issues of race, immigrant-family relationships, queer romance, and, less explicitly, class dynamics without implying the significance of one over the others. Well-paced, brimming with drama, and utterly vital.”
— Kirkus Reviews (starred review)

“An essential and delightful choice that realistically celebrates a teen’s discovery of trust in herself and in others.”
— School Library Journal

“A queer coming-of-age story that also tackles big topics like adultery, racism, and the cultural conflicts of immigrant families.”
— Brightly

Misa Sugiura’s ancestors include a poet, a priestess, a samurai, and a stowaway. Her first novel, It’s Not Like It’s a Secret, was the winner of the Asian/Pacific American Award for YA Literature. Her second novel, This Time Will Be Different, was the HarperCollins Children's Books Lead Read. Misa lives under a giant oak tree in Silicon Valley with her husband, two sons, and three cats. Visit her online at www.misasugiura.com.