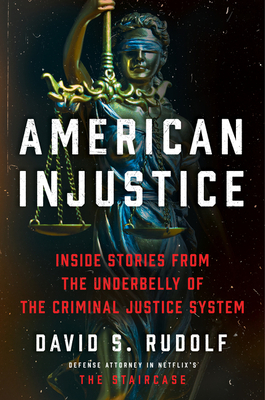 Inside Stories from the Underbelly of the Criminal Justice System

From the fearless defense attorney and civil rights lawyer who rose to fame with Netflix’s The Staircase comes a “bracing account of abuses of power and corruption in the criminal justice system.” (The Guardian)

In the past thirty years alone, more than 2,800 innocent American prisoners—their combined sentences surpassing 25,000 years—have been exonerated and freed after being condemned for crimes they did not commit. Terrifyingly, this number represents only a fraction of the actual number of persons wrongfully accused and convicted over the same period.

Renowned criminal defense and civil rights attorney David Rudolf has spent decades defending the wrongfully accused. In American Injustice, he draws from his years of experience in the American criminal legal system to shed light on the misconduct that exists at all levels of law enforcement and the tragic consequences that follow in its wake. Tracing these themes through the lens of some of his most important cases—including new details from the Michael Peterson trial made famous in The Staircase—Rudolf takes the reader inside crime scenes to examine forensic evidence left by perpetrators; revisits unsolved murders to detail how and why the true culprits were never prosecuted; reveals how confirmation bias leads police and prosecutors to employ tactics that make wrongful arrests and prosecutions more likely; and exposes how poverty and racism fundamentally distort the system.

In American Injustice, Rudolf gives a voice to those who have been the victim of wrongful accusations and shows in the starkest terms the human impact of legal wrongdoing. Effortlessly blending gripping true-crime reporting and searing observations on civil rights in America, American Injustice takes readers behind the scenes of a justice system in desperate need of reform.


Praise For American Injustice: Inside Stories from the Underbelly of the Criminal Justice System…

“Defense attorney Rudolf debuts with a searing look at systemic failures in the U.S. justice system… Enriched by Rudolf’s firsthand experience and heartfelt compassion for his clients, this is a harrowing call for change.” — Publishers Weekly

“I’ve known David Rudolf since 1975 when we began our careers as public defenders in the Bronx. He is a brilliant and passionate advocate whose searing critique of the way power is abused in America’s criminal legal system is based on firsthand experience in the trenches, sophisticated insight, and a willingness to speak truth to power." — Barry Scheck, Co-Founder of & Special Counsel to The Innocence Project, Professor of Law, Cardozo Law School

"By sharing first-hand accounts of people falsely accused and unjustifiably prosecuted, Rudolf vibrantly demonstrates just how quickly and how permanently an innocent person’s life can be destroyed. This is a sobering, infuriating, and essential examination of the flaws and failures of the country’s legal system." — Booklist

"When a defense attorney claims that prosecutors send innocent people to death row, it’s tempting to dismiss the argument as one-sided. But David S. Rudolf, who has made a career of defending the wrongly convicted, makes a highly persuasive case in his bracing new book. ... Defense lawyers have to be persuasive and, above all, persistent. Rudolf shows just how much of both it can take to get justice." — Air Mail

“Trial lawyers are storytellers, and when the trial lawyer is one of the very best, the stories could not be more riveting, or told with more passion. American Injustice is filled with compelling narratives, beautifully told, sweeping the reader along to the final conclusions. They are accounts of injustice and abuses of power that were not aberrant but seemingly embedded in case after case that Rudolf recounts. The impact is chilling. This is an important book not only for players in the criminal legal system, but for a public that truly needs to know.” — Hon. Nancy Gertner (Retired)

“A bracing account of abuses of power and corruption in the criminal justice system.” — The Guardian

“For readers seeking to top up their outrage about abuses in criminal justice, this book makes a fine companion to Bryan Stevenson’s Just Mercy and Emily Bazelon’s Charged. A stellar—and often shocking—report on a broken criminal justice system.”  — Kirkus Reviews (starred review)

“David Rudolf has written a searing indictment of the American criminal justice system. This terrific book is neither a polemic nor an academic treatise. By describing the cases from his amazing career, Rudolf has written a very engaging and powerful first-person account of how justice and injustice are actually done in the United States.” — Erwin Chemerinsky, Dean and Jesse H. Choper Distinguished Professor of Law, University of California, Berkeley School of Law

"David Rudolf has been confronting injustice for decades. In this exciting book, his powerful voice for justice will inspire the new generation and inform us all." — Michael E. Tigar, lawyer, teacher, author of Sensing Injustice: A Lawyer’s Life in the Battle for Change

David S. Rudolf is one of the preeminent trial lawyers in the country. The co-host of the Webby Award-winning criminal justice podcast Abuse of Power, he has taught trial advocacy at the UNC School of Law and the National Institute for Trial Advocacy, and criminal litigation at Duke University School of Law. He has also served in leadership positions in the ABA Criminal Justice Section and the National Association of Criminal Defense Lawyers. Rudolf received worldwide acclaim for his appearances in the Netflix documentary The Staircase, now being adapted as a dramatic series for HBO Max.