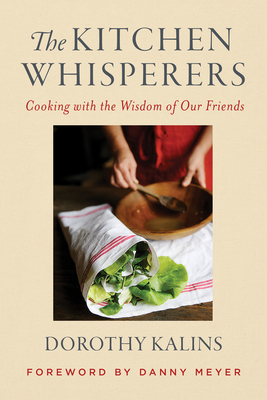 Cooking with the Wisdom of Our Friends

A beautifully written tribute to the people who teach us to cook and guide our hands in the kitchen, by a founding editor of Saveur.

The cooking lessons that stick with us are rarely the ones we read in books or learn through blog posts or YouTube videos (depending on your generation); they’re the ones we pick up as we spend time with good cooks in the kitchen. Dorothy Kalins, founding editor of Savuer magazine, calls the people who pass on their cooking wisdom her Kitchen Whisperers. Consciously or not, they help make us the cooks we are—and help show the way to the kind of cooks we have the potential to become.

Dorothy’s prolific career in food media means many of her Kitchen Whisperers are some of the best chefs around (though the lessons she’s learned from fellow home cooks are just as important). For Dorothy, a lifetime of exposure to incredible cooks and chefs means that she can’t enter her kitchen without hearing the voices of mentors and friends with whom she cooked over the years as they reveal their favorite techniques. Marcella Hazan warns her against valuing look over flavor. Christopher Hirsheimer advises that sometimes water is the best liquid to add to a dish rather than stock or wine. Her onetime Southern mother-in-law wisely knows that not everyone who asks for a biscuit is food hungry. Woven through the text are dozens of narrative recipes, from her mother’s meat loaf to David Tanis’s Swiss Chard Gratin.

The Kitchen Whisperers will prompt older readers to identify and cherish the food mentors in their own lives, just as it will inspire younger readers to seek them out. Stories and recipes from Dorothy’s notable connections will inspire the creative food journeys of all.


Praise For The Kitchen Whisperers: Cooking with the Wisdom of Our Friends…

“[Kalins] shares the coaxed-out wisdom, tips, skills, and recipes from legends like Marcella Hazan, Michael Anthony, and David Tanis, as well as family and friends . . . whose cooking has enriched her life. I'll shout to the heavens if need be: buy this book. It will help you soar higher than you ever dreamed.” — Food & Wine

“Kalins digs deep into memories and sessions with internationally known chefs (e.g., the late Marcella Hazan) to uncover the answers to 'what, exactly, are the secrets of great kitchen work?' . . . Beautifully written, thoughtful content that mirrors our current mindfulness movement.” — Booklist (starred review)

“The Kitchen Whisperers is a personal chronicle of culinary wisdom collected over a lifetime of eating, cooking, and making friends over food. Dorothy’s voice is both evocative and intimate; the stories extraordinary; the lessons they teach us are ones any home cook might put to use. This book reminds us what food lovers already know—that food memories are the most powerful memories.” — Claire Saffitz, author, Dessert Person

“Kalins . . . reflects on the cooks and chefs whose 'generous lessons' enriched her love of food in this meditative memoir. . . . While each memory is a pleasure to savor, what resonates most is the how these stories will inspire readers to take stock and appreciate their own whisperers. Food lovers will want to devour this one slowly.” — Publishers Weekly

“[The book features] many of the culinary names [Kalins] worked with . . . like Colman Andrews, Marcella Hazan, Michael Anthony and Anita Lo. Through her eyes and lively prose, they provide [a] compelling common-sense approach to food that will easily resonate with experienced cooks and should bolster the confidence of novices.” — New York Times

“Reading The Kitchen Whisperers, one can’t escape Dorothy Kalins’s profoundly intimate love of food. All Kalins’s memories are smelled and tasted. Were we all lucky enough to have such richly scented scenes in our personal pasts, we would never be alone.” — Tamar Adler, author, An Everlasting Meal

“Well-written . . . Kalins has written a timeless culinary memoir that allows readers to experience her life in food. Recommended for foodies and cooks of all ages.” — Library Journal

Dorothy Kalins is an award-winning magazine editor, the founding editor-in-chief of Metropolitan Home and of Saveur magazine, and the former executive editor of Newsweek. She has collaborated on the production of many award-winning cookbooks, including David Tanis’s A Platter of Figs, Michael Anthony’s The Gramercy Tavern Cookbook and V is for Vegetables, and Michael Solomonov and Steven Cook’s bestselling Zahav and Israeli Soul. In 2018, she was honored with induction into the American Society of Magazine Editors’ Hall of Fame. Dorothy was the first woman ever named Adweek’s Editor of the Year. She has won two James Beard Awards, and in 2013 was voted into the James Beard Foundation’s Who’s Who of Food & Beverage in America. She lives in New York City with her husband, the filmmaker Roger Sherman.