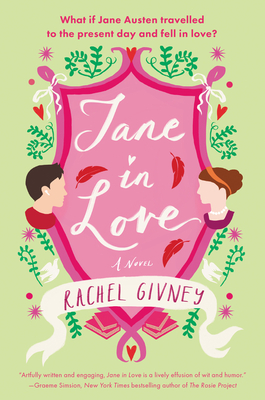 "Artfully written and engaging, Jane in Love is a lively effusion of wit and humor." — Graeme Simsion, New York Times bestselling author of The Rosie Project

“Australian filmmaker, and debut writer, Rachel Givney brings us a whimsical time travel romantic adventure for none other than Jane Austen herself with her new novel, Jane in Love.… entertaining and engaging.”  — Austenprose

“I enjoyed Jane Austen as a curious and insightful character, and I enjoyed the arc of Sofia, a modern actress…Her character is insightful and interesting, and deeply interested in everything around her...Her friendship with Sofia becomes delightful and her experience in a modern hospital which can’t fix everything despite all its modern technology is poignant.” — Smart Bitches, Trashy Bitches

“Givney also works contrasts between the two time periods into the plot that will inspire contemplation or discussion involving changes in family and romantic relationships, the intricate balance of a woman’s choices and how society determines her worth, and the inequitable impacts of aging on men and women. An engaging blend of thoughtful topics and funny moments, cleverness and charm, this is a must-read for Janeites, those wondering what the fuss is about Austen, and all readers who like lively, smart, and provocative fiction.”
— Booklist (starred review)