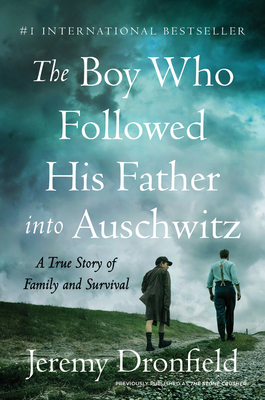 The Boy Who Followed His Father into Auschwitz

A True Story of Family and Survival

“Brilliantly written, vivid, a powerful and often uncomfortable true story that deserves to be read and remembered. It beautifully captures the strength of the bond between a father and son.”--Heather Morris, author of #1 New York Times bestseller The Tattooist of Auschwitz

The #1 Sunday Times bestseller—a remarkable story of the heroic and unbreakable bond between a father and son that is as inspirational as The Tattooist of Auschwitz and as mesmerizing as The Choice.

Where there is family, there is hope

In 1939, Gustav Kleinmann, a Jewish upholster from Vienna, and his sixteen-year-old son Fritz are arrested by the Gestapo and sent to Germany. Imprisoned in the Buchenwald concentration camp, they miraculously survive the Nazis’ murderous brutality.

Then Gustav learns he is being sent to Auschwitz—and certain death.

For Fritz, letting his father go is unthinkable. Desperate to remain together, Fritz makes an incredible choice: he insists he must go too. To the Nazis, one death camp is the same as another, and so the boy is allowed to follow.

Throughout the six years of horror they witness and immeasurable suffering they endure as victims of the camps, one constant keeps them alive: their love and hope for the future.

Based on the secret diary that Gustav kept as well as meticulous archival research and interviews with members of the Kleinmann family, including Fritz’s younger brother Kurt, sent to the United States at age eleven to escape the war, The Boy Who Followed His Father into Auschwitz is Gustav and Fritz’s story—an extraordinary account of courage, loyalty, survival, and love that is unforgettable.


Praise For The Boy Who Followed His Father into Auschwitz: A True Story of Family and Survival…

“Brilliantly written, vivid, a powerful and often uncomfortable true story that deserves to be read and remembered. It beautifully captures the strength of the bond between a father and son.”
— Heather Morris, author of #1 New York Times bestseller The Tattooist of Auschwitz

“Today, when studies are showing many Americans know little about the Holocaust, this will serve as a compelling remedy: a personal and universal account of brutality at its worst and of family devotion at its best.”
— Kirkus Reviews (starred review)

“An extraordinary tale of endurance and filial love. It is a miraculous story with many twists and Dronfield tells it well in an energetic and lively style.”
— The Times (London)

“The horrors of the Holocaust are effectively conveyed on a human scale in this gripping account.”
— Publishers Weekly

"Heart-wrenching yet compelling. . . . Beautifully written, deeply poignant in its detail, it is a necessary testament today in the fight against Holocaust denial."
— Helen Fry, author of The London Cage: The Secret History of Britain's World War II Interrogation Center

“A deeply humane account. This book could not be more timely and deserves the widest possible readership.”
— Daily Express (UK)

Jeremy Dronfield is a biographer, historian, novelist and former archaeologist. His recent non-fiction titles include Dr James Barry: A Woman Ahead of Her Time, a Sunday Times Book of the Year. He lives in England.