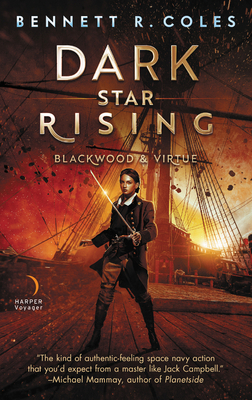 The misfit crew of HMSS Daring are on a covert mission to dismantle a sprawling pirate network threatening the empire in this enthralling second Blackwood & Virtue novel—a thrilling, action-packed blend of the military sea adventures of Patrick O’Brian’s Master and Commander series with Jim Butcher’s sci fi Cinder Spires novels.

Exuberant after scoring a major victory against enemy pirates, the star sailing ship HMSS Daring eagerly embarks on its new mission. Until the pirate network is dismantled and its mysterious leader Dark Star brought to justice, the safety of the empire remains in jeopardy.

Supported by the ship’s misfit crew, Subcommander Liam Blackwood and Quartermaster Amelia Virtue go undercover, following leads that take them deep into the pirate network. Yet the closer they get to its center and the elusive Dark Star, the clearer it becomes that all is not what it seems.

Pirates aren’t the only danger the duo face. Empowered by imperial decree, an old enemy is murdering noble families and taking their property—an enemy that has a personal grudge against Daring and her crew. And now he is on his way across the galaxy to exact revenge.

Caught between ruthless pirates, a vengeful enemy, and their own increasingly intense feelings, Liam and Amelia must use all their cunning, charm, and daring to get out this alive.

"This naval adventure in space is recommended for fans of David Weber’s character Honor Harrington and Lois McMaster Bujold’s “Vorkosigan Saga,” as all three combine adventure, espionage, tight-knit crews of adopted families, as well as a mix of governmental shenanigans, warfare, and political corruption." — Library Journal

Bennett R. Coles has a degree in naval history and served fifteen years as an officer in the Royal Canadian Navy. His first novel, Virtues of War, won the Cygnus Award grand prize for science fiction and spawned two follow-up novels, as well as a short story in the 2017 anthology Infinite Stars. He lives in Victoria, British Columbia, with his wife and two sons.