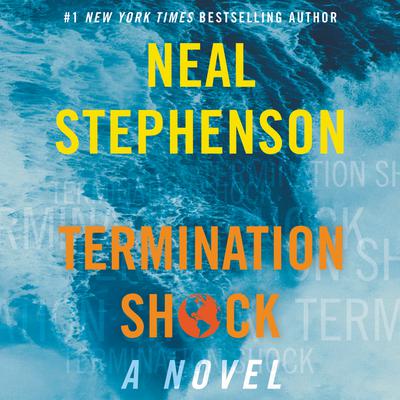 “Stephenson turns his considerable talent for world-building to our near future. His mix of wit, science, and suspense creates a story of queens, cowboys, and soldiers entangled in the last-ditch effort to save humanity or doom it.”
— Greg Cass, Harvard Book Store, Cambridge, MA
View the List

From Neal Stephenson—who coined the term “metaverse” in his 1992 novel Snow Crash—comes a sweeping, prescient new thriller that transports readers to a near-future world in which the greenhouse effect has inexorably resulted in a whirling-dervish troposphere of superstorms, rising sea levels, global flooding, merciless heat waves, and virulent, deadly pandemics.

“Stephenson is one of speculative fiction’s most meticulous architects. . . . Termination Shock manages to pull off a rare trick, at once wildly imaginative and grounded.” — New York Times Book Review

One man—visionary billionaire restaurant chain magnate T. R. Schmidt, Ph.D.—has a Big Idea for reversing global warming, a master plan perhaps best described as “elemental.” But will it work? And just as important, what are the consequences for the planet and all of humanity should it be applied?

Ranging from the Texas heartland to the Dutch royal palace in the Hague, from the snow-capped peaks of the Himalayas to the sunbaked Chihuahuan Desert, Termination Shock brings together a disparate group of characters from different cultures and continents who grapple with the real-life repercussions of global warming. Ultimately, it asks the question: Might the cure be worse than the disease?

Epic in scope while heartbreakingly human in perspective, Termination Shock sounds a clarion alarm, ponders potential solutions and dire risks, and wraps it all together in an exhilarating, witty, mind-expanding speculative adventure.