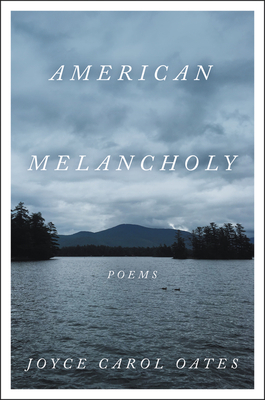 A new collection of poetry from an American literary legend, her first in twenty-five years

Joyce Carol Oates is one of our most insightful observers of the human heart and mind, and, with her acute social consciousness, one of the most insistent and inspired witnesses of a shared American history.

Oates is perhaps best known for her prodigious output of novels and short stories, many of which have become contemporary classics. However, Oates has also always been a faithful writer of poetry. American Melancholy showcases some of her finest work of the last few decades.

Covering subjects big and small, and written in an immediate and engaging style, this collection touches on both the personal and political. Loss, love, and memory are investigated, along with the upheavals of our modern age, the reality of our current predicaments, and the ravages of poverty, racism, and social unrest. Oates skillfully writes characters ranging from a former doctor at a Chinese People’s Liberation Army hospital to Little Albert, a six-month-old infant who took part in a famous study that revealed evidence of classical conditioning in human beings.

"Joyce Carol Oates is a ventriloquist of mind. In these startling new poems, she enters human suffering, her own and that of others, with a disarming imaginative directness. Her empathy for others lights these scary poems from the inside out. The mental and emotional suffering that she uncovers in people’s stories comes to feel like our own, a crucial reminder that we are all here together in what seem like the last days. Frontal in their imagining yet deeply compassionate, these are poems we need right now." — Chase Twichell, author of Things as It Is

"Here is Joyce Carol Oates in her immense capacity to see human frailty.  In poems that are both tensely concise and loosely expansive, she is an accessible experimenter.  Humiliation and failure cannot be escaped.  But sweetness and mercy emerge, too.  American Melancoly is a fervid, painful, virtuosic book." — Henri Cole

"Oates’s high profile as a novelist should not discourage avid poetry readers from seeking out this volume, which aptly demonstrates the writer’s gifts in the genre and includes several poems of the highest quality." — Library Journal (starred review)