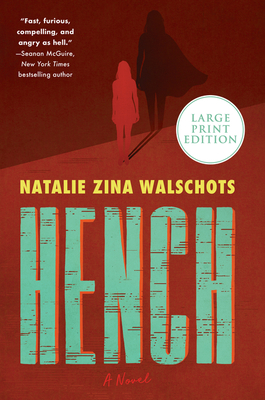 “Hench is absolutely terrific! Walschots has found a fresh, original, feminist angle on the tropes of superheroes and supervillains in this smart, lively novel. Anna is barely subsisting from temp job to temp job — even supervillains need someone to do their data entry — when she becomes collateral damage in a superhero’s intervention. Injured and jobless, she fights back by collecting data on the negative effects caused by superheroes. As Anna’s research goes viral, she’s tapped for a new job with the supervillain, giving her an opportunity to use her skills to fight back against the so-called forces of good. Very highly recommended!”
— Carol Schneck Varner, Schuler Books (Okemos), Okemos, MI
View the List

The Boys meets My Year of Rest and Relaxation in this smart, imaginative, and evocative novel of love, betrayal, revenge, and redemption, told with razor-sharp wit and affection, in which a young woman discovers the greatest superpower—for good or ill—is a properly executed spreadsheet.

Anna does boring things for terrible people because even criminals need office help and she needs a job. Working for a monster lurking beneath the surface of the world isn’t glamorous. But is it really worse than working for an oil conglomerate or an insurance company? In this economy?

As a temp, she’s just a cog in the machine. But when she finally gets a promising assignment, everything goes very wrong, and an encounter with the so-called “hero” leaves her badly injured.  And, to her horror, compared to the other bodies strewn about, she’s the lucky one.

So, of course, then she gets laid off.

With no money and no mobility, with only her anger and internet research acumen, she discovers her suffering at the hands of a hero is far from unique. When people start listening to the story that her data tells, she realizes she might not be as powerless as she thinks.

Because the key to everything is data: knowing how to collate it, how to manipulate it, and how to weaponize it. By tallying up the human cost these caped forces of nature wreak upon the world, she discovers that the line between good and evil is mostly marketing.  And with social media and viral videos, she can control that appearance.

It’s not too long before she’s employed once more, this time by one of the worst villains on earth. As she becomes an increasingly valuable lieutenant, she might just save the world.


Praise For Hench: A Novel…

"Witty and inventive . . . the pleasure of the novel is the slow rollout of the rules. Creating a universe involves inventing lots of little problems, and the solutions here don’t disappoint."
— New York Times

"Hench is an engrossing take on the superheroic. It's smart and imaginative; an exemplary rise-of-darkness story, one I won't soon forget...I honestly can't wait to see what Natalie Zina Walschots does next with the genre."
— NPR Books

“Walschots delivers a book that’s dark and honest, sharp and raw, full of visceral tenderness and breathtaking insight. Hench belongs in a lineage of superhero prose fiction that includes Robert Mayer’s Superfolks (which it surpasses) and Samit Basu’s Turbulence (which it equals), and is one of the best books I read in 2020. I rarely hope for sequels to books that function beautifully as standalones, but am actively longing for one here.”


— Amal El-Mohtar, Hugo Award–winning writer and coauthor of This Is How You Lose the Time War

“This book is fast, furious, compelling, and angry as hell. It's a beautiful deconstruction of the superhero genre, and I'm only a little annoyed that I didn't think of it first.”
— Seanan McGuire, New York Times bestselling author

“Get ready to root for the bad guys.”
— Jennifer Estep, New York Times and USA Today bestselling author of the Crown of Shards series

“This Anti(super)hero tale is jam-packed with action and fueled by Anna’s breathless, dizzying, exhilarating rage. Anna faces off with the supernatural, but she feels so very real as she rockets along on her furious and furiously-paced trajectory. Hench is a ride—I loved it.”
— Joshilyn Jackson, New York Times bestselling author of Never Have I Ever

“Sharp, unexpected, and hilarious—HENCH takes the classic superhero story and cleverly turns it on its head. Get ready for a delightfully twisted adventure that will make you want to root for the bad guys.”
— Peng Shepherd, author of The Book of M

"Smart, witty, and at times bloody, this book will please comic book fans who wish to take a jab at the superhero tropes, as well as readers who enjoy dark humor with a bit of satire tossed into the mix."
— Library Journal (starred review)

" In this refreshing, subversive, and darkly humorous debut novel, poet and journalist Walscholts slowly reveals the nuances of her superpower-filled world, keeping readers guessing. Hench reads like a comic without the illustrations and is packed with subplots and rapid-fire wit. With a diverse and inclusive cast of characters, Walschots' original tale performs a brilliant and exciting variation on the superhero trope and is not to be missed."
— Booklist (starred review)

"Witty and wry, the scenes flash by, evocative of comic books, with tight prose and punchy dialogue, moving the plot toward the inevitable battle between good and evil. But in Hench, which side to root for is decidedly complicated."
— Shelf Awareness (starred review)

“An outstanding, original story, and a must read for all fans of super hero stories.”
— Michael Mammay, author of the Planetside series

Natalie Zina Walschots is a freelance writer, community manager and bailed academic based in Toronto. She writes everything from reviews of science fiction novels and interviews with heavy metal musicians to to in-depth feminist games criticism and pieces of long-form journalism. She is the author of two books of poetry. In her free time she has been exploring the poetic potential of the notes engine in the video game Bloodborne, writing a collection of polyamorous fairytales, developing interactive narrative classes and composing short text-based body horror games. She also plays a lot of D&D, participates in a lot of Nordic LARPs, watches a lot of horror movies and reads a lot of speculative fiction.
Loading...
or
Not Currently Available for Direct Purchase