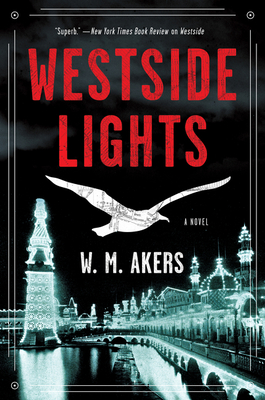 The Alienist meets the magical mystery of The Ninth House as W. M. Akers returns with the third book in his critically acclaimed Jazz Age fantasy series set in the dangerous Westside of New York City, following private detective Gilda Carr’s hunt for the truth—one tiny mystery at a time.

“Like a literary shot of Prohibition-era rotgut moonshine—bracing, quite possibly hallucination-inducing, and unlike anything you’ve ever experienced before.” — Kirkus Reviews (starred review) on Westside

The Westside of Manhattan is desolate, overgrown, and dangerous—and Gilda Carr wouldn’t have it any other way. An eccentric detective whose pursuit of tiny mysteries has dragged her to the brink of madness, Gilda spends 1923 searching for something that’s eluded her for years: peace. On the revitalized waterfront of the Lower West, Gilda and the gregarious ex-gangster Cherub Stevens start a new life on a stolen yacht. But their old life isn’t done with them yet.

They dock their boat on the edge of the White Lights District, a new tenderloin where liquor, drugs, sex, and violence are shaken into a deadly cocktail. When her pet seagull vanishes into the District, Gilda throws herself into the search for the missing bird. Up late watching the river for her pet, Gilda has one drink too many and passes out in the cabin of her waterfront home.

She wakes to a massacre.

Eight people have been slaughtered on the deck of the Misery Queen, and Cherub is among the dead. Gilda, naturally, is the prime suspect. Hunted by the police, the mob, and everyone in between, she must stay free long enough to find the person who stained the Hudson with her beloved’s blood. She will discover that on her Westside, no lights are bright enough to drive away the darkness.

"Highly recommended for readers who like their genres so bent that they flow into each other, where the fantasy is so dark it’s nearly horror and the mystery uncovers rot and magic in equal measure." — Library Journal (starred review) on Westside Lights

"The characters and setting of 1923 work perfectly here and the story is one you want to keep reading along." — Red Carpet Crash on Westside Lights

“The Alienist meets The City & The City in this brilliant debut that mixes fantasy and mystery. Gilda Carr’s ‘tiny mysteries’ pack a giant punch.”  — David Morrell, New York Times bestselling author of Murder as a Fine Art, on Westside

“Akers’ debut novel is an addictively readable fusion of mystery, dark fantasy, alternate history, and existential horror...It’s like a literary shot of Prohibition-era rotgut moonshine—bracing, quite possibly hallucination-inducing, and unlike anything you’ve ever experienced before...The illegitimate love child of Algernon Blackwood and Raymond Chandler.” — Kirkus Reviews (starred review) on Westside

"The Westside novels are splendid mixtures of traditional mystery and other-Earth fantasy." — Booklist

W.M. Akers is a novelist, playwright, and game designer. He is the author of the mystery novels Critical Hit, Westside, and Westside Saints; the creator of the bestselling games Deadball: Baseball With Dice and Comrades: A Revolutionary RPG; and the curator of the history newsletter Strange Times. He lives in Philadelphia, but hasn’t traded in his Mets cap yet. Learn more about his work at wmakers.net.