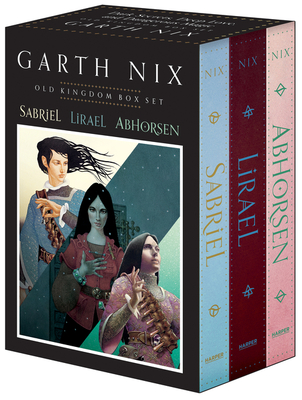 Just in time for the 25th anniversary of Sabriel, this three-book box set features the original art from the classic must-read fantasy trilogy, a perfect gift for fans of Garth Nix and the teen fantasy genre.

Return to the Old Kingdom and experience one of the first feminist teen fantasies. With paperback editions of Sabriel, Lirael, and Abhorsen—all with the cover artwork by Leo and Diane Dillon—it’s a perfect gift for fantasy fans.

In a land where magic rules, the clash between the living and the dead will be forever changed by dark secrets, deep love, and dangerous magic.

“Sabriel is a winner, a fantasy that reads like realism. Here is a world with the same solidity and four dimensional authority as our own, created with invention, clarity, and intelligence. I congratulate Garth Nix. And I look forward to reading his next piece of work.” —Philip Pullman, author of His Dark Materials trilogy

“Nix has created an ingenious, icy world. The action charges along at a gallop. A page-turner for sure.” —ALA Booklist (starred review)

“An involving fantasy that takes off running and doesn’t let up the pace until the final page. The pacing is exquisite, the suspense rising and falling and rising again until the truly edge-of-your-seat finale. A winner for fantasy and adventure lovers.” —BCCB

“What makes Lirael a delight is the magic that Nix brings to his story and to his characters.” —Publishers Weekly (starred review)

“Riveting. Readers who like their fantasy intense in action, magisterial in scope, and apocalyptic in consequences will revel in every work.” —Kirkus Reviews (starred review)

“This title has a cinematic sweep; the tense, climactic confrontation pulls from the very beginning into a tightly constructed, satisfying conclusion.” —BCCB

“Nix has created an ingenious, icy world. The action charges along at a gallop. A page-turner for sure.”
— ALA Booklist (starred review)

"Sabriel is an engaging tale that slays sexual stereotypes along with its monsters.”
— San Francisco Chronicle

“Nix’s monsters are scary and repulsive, his sense of humor is downright sneaky, and he puts his heroine through engrossing physical and emotional wringers. This book is guaranteed to keep readers up way past their bedtimes.”
— School Library Journal

“A compelling fantasy. The story is remarkable for the level of originality and leaves readers to explore for themselves.”
— Horn Book Magazine

“The action charges along at a gallop--a page turner for sure.”
— ALA Booklist (starred review)