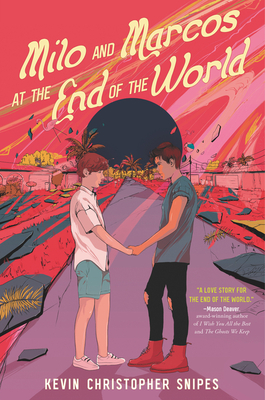 Milo and Marcos at the End of the World

As natural disasters begin to befall them the closer they become, Milo and Marcos soon begin to wonder if the universe itself is plotting against them in this young adult debut by the playwright and creator of The Two Princes podcast, Kevin Christopher Snipes.

Milo Connolly has managed to survive most of high school without any major disasters, so by his calculations, he’s well past due for some sort of Epic Teenage Catastrophe. Even so, all he wants his senior year is to fly under the radar.

Everything is going exactly as planned until the dreamy and charismatic Marcos Price saunters back into his life after a three-year absence and turns his world upside down. Suddenly Milo is forced to confront the long-buried feelings that he’s kept hidden not only from himself but also from his deeply religious parents and community.

To make matters worse, strange things have been happening around his sleepy Florida town ever since Marcos’s return—sinkholes, blackouts, hailstorms. Mother Nature is out of control, and the closer Milo and Marcos get, the more disasters seem to befall them. In fact, as more and more bizarre occurrences pile up, Milo and Marcos find themselves faced with the unthinkable: Is there a larger, unseen force at play, trying to keep them apart? And if so, is their love worth risking the end of the world?


Praise For Milo and Marcos at the End of the World…

"A funny, sweet, and emotional navigation of faith and queerness." — Kirkus Reviews

"Snipes thoughtfully captures Milo’s internal turmoil on his journey to self-acceptance, and the teens’ willingness to explore their relationship amid calamity offers an engaging image of headlong first love." — Publishers Weekly

"Fans of the author’s podcast, The Two Princes, and those looking for a meaningful queer love story will delight in this high-stakes, energetically paced senior-year tale." — Booklist

"Queer teens who value their faith may find solace in Milo’s story, as he grows into himself and accepts his sexuality in tandem with his religious beliefs." — Bulletin of the Center for Children’s Books

"A love story for the end of the world." — Mason Deaver, award-winning author of I Wish You All the Best and The Ghosts We Keep

“Milo will win your heart as he risks incurring the literal wrath of God—and losing everything in the process—in order to own his identity and love himself as he is.” — Misa Sugiura, author of Love & Other Natural Disasters

"Snipes is somehow both a harbinger of doom and a herald of love and I am completely here for it! If the apocalypse ever does happen, I'm going to want a copy of this book with me!"  — Jason June, author of Jay's Gay Agenda and Out of the Blue

“An absolute diamond of a debut! It humorously captures how queer boys falling in love for the first time can feel beautiful, strange, and literally earth-shattering all at once.”  — Adam Sass, award-winning author of Surrender Your Sons

Kevin Christopher Snipes is a New York-based writer who was born and raised in Florida. He spent his early career in the theater writing such plays as A Bitter Taste, The Chimes and Ashes, Ashes. Later, for Gimlet Media, he created the queer fantasy podcast The Two Princes. He can generally be found watching reruns of Doctor Who and The Golden Girls in his spare time. Milo and Marcos at the End of the World is his first novel.