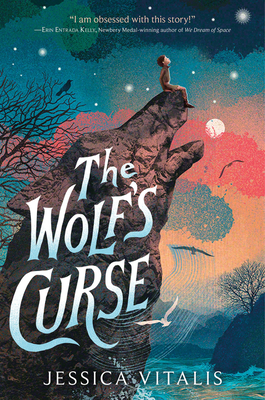 “I am obsessed with this story!”—Erin Entrada Kelly, author of the Newbery Honor Book We Dream of Space

“Boldly tells readers to take a closer look at the stories they’re told—not to mention at the wolves that might be lurking in the shadows. A clear-eyed, big-hearted fable of compassion, friendship, and love.”—Anne Ursu, author of The Real Boy

“A lyrical tale of loss and survival, tradition and belief, in which tension and secrets build like a towering wave.”—Diane Magras, author of The Mad Wolf’s Daughter

“A fable as polished and timeless as a fine wooden toy.”—Catherine Gilbert Murdock, author of the Newbery Honor Book The Book of Boy

Shunned by his fearful village, a twelve-year-old apprentice embarks on a surprising quest to clear his name, with a mythic—and dangerous—wolf following closely at his heels. Jessica Vitalis’s debut is a gorgeous, voice-driven literary fantasy about family, fate, and long-held traditions. The Wolf’s Curse will engross readers of The Girl Who Drank the Moon and A Wish in the Dark.

Gauge’s life has been cursed since the day he cried Wolf and was accused of witchcraft. The Great White Wolf brings only death, Gauge’s superstitious village believes. If Gauge can see the Wolf, then he must be in league with it.

So instead of playing with friends in the streets or becoming his grandpapa’s partner in the carpentry shop, Gauge must hide and pretend he doesn’t exist. But then the Wolf comes for his grandpapa. And for the first time, Gauge is left all alone, with a bounty on his head and the Wolf at his heels.

A young feather collector named Roux offers Gauge assistance, and he is eager for the help. But soon the two—both recently orphaned—are questioning everything they have ever believed about their village, about the Wolf, and about death itself.

Narrated by the sly, crafty Wolf, Jessica Vitalis’s debut novel is a vivid and literary tale about family, friendship, belonging, and grief. The Wolf’s Curse will captivate readers of Laurel Snyder’s Orphan Island and Molly Knox Ostertag’s The Witch Boy.


Praise For The Wolf's Curse…

“I am obsessed with this story!” — Erin Entrada Kelly, Newbery Medal-winning author of We Dream of Space

“A lyrical tale of loss and survival, tradition and belief, in which tension and secrets build like a towering wave. The Wolf's Curse is a story of many layers. Young readers will treasure this beautiful debut and hold it close to their hearts.”— — Diane Magras, author of The Mad Wolf’s Daughter

“A fable as polished and timeless as a fine wooden toy. Readers will root for spunky heroes Gauge and Roux while keeping watch for a certain mysterious wolf who’s not what she seems . . ." — Catherine Gilbert Murdock, author of the Newbery Honor book The Book of Boy

The Wolf’s Curse boldly tells readers to take a closer look at the stories they’re told—not to mention at the wolves that might be lurking in the shadows. A clear-eyed, big hearted fable of compassion, friendship, and love. — Anne Ursu, author of The Real Boy

“In the France-inspired town of Bouge-by-the-Sea . . . Gauge is the only person able to see the Great White Wolf, a supernatural canine who ferries souls to the afterlife. . . . Fleeing his pursuers, Gauge stumbles upon unlikely allies . . . [and] they begin to suspect that neither the Wolf nor their town’s death rituals are quite what they seem—and they are determined to unearth some answers. . . . Accessible and intriguing worldbuilding, particularly around the Wolf’s backstory, will pique readers’ interests, as will larger questions about life, death, truth, and tradition. Thoughtful, creative, and engaging.” — Kirkus Reviews

“In a thought-provoking debut, Vitalis considers grief, the end of life, and the industry of death through the eyes of an otherworldly, psychopompic wolf. . . . Through the Wolf’s archly omniscient first-person narration, Vitalis relates the affecting stories of Gauge and Roux, whose raw mourning provides a revealing contrast to the Lord Mayor’s simmering, unprocessed grief. . . . [A] contemplative story.” — Publishers Weekly

“Vitalis’s striking debut is alluringly told through the first-person perspective of the Wolf, offering a safe distance for sensitive readers to engage in a story about death, grief, and corruption. The language is wonderfully crisp and clear, showcasing a literary style that favors a slower, more thoughtful pace but still invites a middle-grade audience. A respectful, yet skeptical, exploration of the rituals used both to cope with and exploit death adds a meaningful layer to this poignant tale.” — Booklist

“Twelve-year-old Gauge has spent the last five years hidden from his fellow villagers, because the Lord Mayor Vulpine convinced the residents that the boy is a Voyant, who can compel an invisible wolf to kill. . . . [An] extraordinary fantasy . . . The story is an emotional rollercoaster with all the feels." — Bulletin of the Center for Children’s Books

Jessica Vitalis is the author of The Wolf’s Curse. She is a full-time writer with a previous career in business and an MBA from Columbia Business School. An American expat, she now lives in Canada with her husband and two daughters.