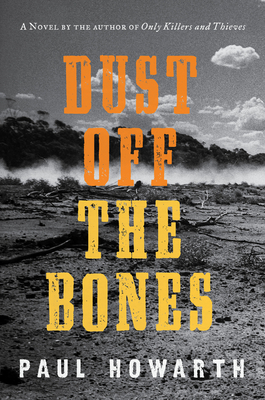 Dust Off the Bones

“Arresting, powerful, and very much worth reading.”—Scott Simon (NPR)

"A tale of violence and redemption in the Australian Outback....Fast-paced and brimming with colorful, realistic detail, the novel poses disturbing questions about the Australia’s historic cruelty to its native inhabitants....A complex, sophisticated morality play."  (Starred Kirkus Review)

The author of the acclaimed Only Killers and Thieves returns to turn-of-the-century Australia in this powerful sequel that follows the story of brothers Tommy and Billy McBride, the widow of their family’s killer, Katherine Sullivan, and the sadistic Native Police officer Edmund Noone

In 1890, estranged brothers Tommy and Billy McBride are living far apart in Queensland, each dealing with the trauma that destroyed their family in different ways. Now 21, Billy bottles his guilt and justifies his past crimes while attempting to revive his father’s former cattle run and navigate his feelings for the young widow Katherine Sullivan. Katherine, meanwhile, cherishes her newfound independence but is struggling to establish herself as head of the vast Broken Ridge cattle empire her corrupt late husband mercilessly built.

But even in the outback, the past cannot stay buried forever. When a judicial inquest is ordered into the McBride family murders and the subsequent reprisal slaughter of the Kurrong people, both Billy and Police Inspector Edmund Noone – the man who led the massacre – are called to testify. The inquest forces Billy to relive events he has long refused to face. He desperately needs to find his brother, Tommy, who for years has been surviving in the wilderness, attempting to move on with his life. But Billy is not the only one looking for Tommy. Now the ruthless Noone is determined to find the young man as well, and silence both brothers for good.

An enthralling, propulsive adventure that builds in suspense, told in gorgeous prose and steeped in history and atmosphere, Dust Off the Bones raises timeless issues of injustice, honor, morality, systemic racism, and the abuse of power. With an unflinching eye, Paul Howarth examines the legacy of violence and the brutal realities of life in a world remarkably familiar to our own.


Praise For Dust Off the Bones: A Novel…

“A complex, sophisticated morality play….Fast-paced and brimming with colorful, realistic detail, DUST OFF THE BONES paints a vivid portrait of colonial Australia in the midst of its transition to independence as the 20th century begins while posing disturbing questions about the country’s historic cruelty to its native inhabitants.”
— Kirkus Reviews (starred review)

“Howarth’s sequel to Only Killers and Thieves is as searing and savage as the Australian frontier setting that both novels share… This masterly tale of trauma and retribution is more than worthy of the original.”
— Publishers Weekly (starred review)

“An unsparing exploration of guilt and Australia’s violent origins and also a quest for redemption and peace. It is a measure of Howarth’s skill that the reader wants the McBride boys to reach their goals with such intensity that the book is almost too painful to read. Howarth has been compared to Cormac McCarthy; this pair of books shows the comparison is deserved.”        — The Times (London)

“The villainous Inspector Edward Noone is one of the most compelling antagonists in recent historical fiction…It is testament to Howarth’s skill as a writer that his narrative both engages and challenges in its accomplished depiction of a brutal and violent age.”            — The Guardian

“A gripping tale of adventure [and] a moving account of redemption”. — Sunday Times (London)

Paul Howarth is a British-Australian author and former lawyer who holds an MA in creative writing from University of East Anglia, where he was awarded the Malcolm Bradbury Scholarship. In 2018 his debut novel, Only Killers and Thieves, was published to international acclaim, winning the Barnes & Noble Discover Award for best fiction, and appearing on numerous other awards and books of the year lists.