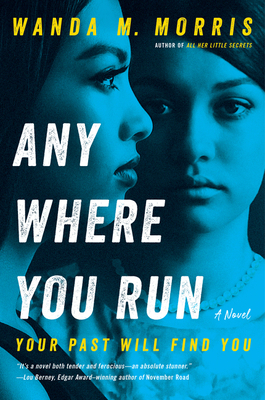 From the award-winning author of All Her Little Secrets comes yet another gripping, suspenseful novel where, after the murder of a white man in Jim Crow Mississippi, two Black sisters run away to different parts of the country . . . but can they escape the secrets they left behind?

It’s the summer of 1964 and three innocent men are brutally murdered for trying to help Black Mississippians secure the right to vote. Against this backdrop, twenty-two year old Violet Richards finds herself in more trouble than she’s ever been in her life. Suffering a brutal attack of her own, she kills the man responsible. But with the color of Violet’s skin, there is no way she can escape Jim Crow justice in Jackson, Mississippi. Before anyone can find the body or finger her as the killer, she decides to run. With the help of her white beau, Violet escapes. But desperation and fear leads her to hide out in the small rural town of Chillicothe, Georgia, unaware that danger may be closer than she thinks.

Back in Jackson, Marigold, Violet’s older sister, has dreams of attending law school. Working for the Mississippi Summer Project, she has been trying to use her smarts to further the cause of the Black vote. But Marigold is in a different kind of trouble: she’s pregnant and unmarried. After news of the murder brings the police to her door, Marigold sees no choice but to flee Jackson too. She heads North seeking the promise of a better life and no more segregation. But has she made a terrible choice that threatens her life and that of her unborn child?

Two sisters on the run—one from the law, the other from social shame. What they don’t realize is that there’s a man hot on their trail. This man has his own brand of dark secrets and a disturbing motive for finding the sisters that is unknown to everyone but him . . .


Praise For Anywhere You Run: A Novel…

“Wanda M. Morris is ready to shake up the legal thriller as only one who knows that world inside out can.”  — Entertainment Weekly on All Her Little Secrets

"The flashy, busy, unlikely plot is elevated by Morris' urgent portrayal of a Black woman trying to navigate a world stacked against her, and the moving flashbacks to her childhood." — New York Times Book Review on All Her Little Secrets

“Ellice Littlejohn discovers at the start of this tense and propulsive thriller that the boss with whom she was having an affair has been murdered, setting the tone for a page-turning tale dripping with suspense and intrigue.”  — Boston Globe on All Her Little Secrets

“All Her Little Secrets is a brilliantly nuanced but powerhouse exploration of race, the legal system, and the crushing pressure of keeping secrets. Morris brings a vibrant and welcome new voice to the thriller space.” — Karin Slaughter, New York Times and international bestselling author

“An eye-opening look at what it is to fight all the -isms of being Black and female in America. Ellice is a compelling and multidimensional hero in this must-have debut that will be embraced by all legal-thriller readers.” — Booklist (starred review) on All Her Little Secrets

"It's hard to know just how far you might go to protect yourself and your secrets... but it's remarkably easy to get swept up into this razor-sharp workplace thriller. At times deeply disturbing and all the while gripping, All Her Little Secrets is a refreshing whodunnit that will keep you guessing—and second-guessing—from start to finish." — Zakiya Dalila Harris, New York Times bestselling author of The Other Black Girl

“Wanda M. Morris hits all the right notes in All Her Little Secrets, a taut, sleek thriller that’s also a searing story about the secrets we can never manage to leave behind. A stunning debut.” — Alafair Burke, New York Times bestselling author

“Attorney Morris puts her experiences as a Black woman navigating the corridors of corporate power to good use in her strong debut... John Grisham fans will be pleased.” — Publishers Weekly on All Her Little Secrets

Wanda M. Morris is the acclaimed author of All Her Little Secrets, which has been praised by Karin Slaughter as "brilliantly nuanced" and reviewed by The Boston Globe, LA Times, New York Times, Atlanta Journal-Constitution, Seattle Times, and South Florida Sun Sentinel among others. It was named as one of the "Best Books of 2021" by Hudson Booksellers and selected as the #1 Top Pick for Library Reads by librarians across the country. It was serialized in Entertainment Weekly and selected as a Marie Claire book club pick.

Wanda is a member of Sisters in Crime, Mystery Writers of America, and Crime Writers of Color. A corporate attorney, Wanda has worked in the legal departments of some of America's top Fortune 100 companies. She is an accomplished presenter and leader. As a former President of the Georgia Chapter of the Association of Corporate Counsel, she established a signature female empowerment program known as the Women's Initiative. She is married, the mother of three and lives in Atlanta, Georgia.