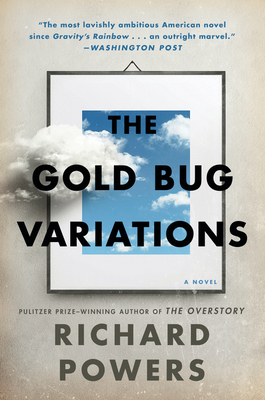 From the Pulitzer Prize–winning author of The Overstory and the forthcoming Bewilderment, a magnificent double love story of two young couples separated by a distance of twenty-five years.

Stuart Ressler, a brilliant young molecular biologist, sets out in 1957 to crack the genetic code. His efforts are sidetracked by other, more intractable codes—social, moral, musical, spiritual—and he falls in love with a member of his research team.

Years later, another young man and woman team up to investigate a different scientific mystery: Why did the eminently promising Ressler suddenly disappear from the world of science? Strand by strand, these two love stories twist about each other in a double helix of desire.

The critically acclaimed third novel from Pulitzer Prize–winning author Richard Powers, The Gold Bug Variations is an intellectual tour-de-force that probes the meaning of love, science, music, and art.


Praise For The Gold Bug Variations…

“Magnificent...Powers’s characters are fascinating, brilliant, eccentric people...but beyond that is the ability to induce the reader to see the world differently, revealed in a new light.”  — San Francisco Chronicle

“The Gold Bug Variations is the most important and intellectually challenging American novel published this year.”  — Philadelphia Inquirer