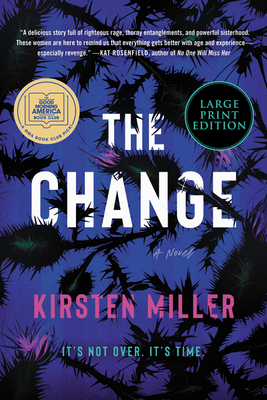 Big Little Lies meets The Witches of Eastwick—a gloriously entertaining and knife-sharp revenge fantasy about three women whose midlife crisis brings unexpected new powers—putting them on a collision course with the evil that lurks in their wealthy beach town.

"A roar of rage, a pacy page-turner, I loved it with all my broken heart. Read it. You’ll love it."--New York Times bestselling author Marian Keyes

"Miller triumphs...THE CHANGE is that rare treat: a suspenseful story with great pacing, memorable characters, and an engaging voice. Fantastic in every way, this fierce anthem against misogyny is a smash."--Publishers Weekly (starred review)

"A pointed, punchy, and potent thriller...wry and clever, serious and exacting, and masterfully suspenseful."--Booklist (starred review)

After Nessa James’s husband dies and her twin daughters leave for college, she’s left all alone in a trim white house not far from the ocean. In the quiet of her late forties, the former nurse begins to hear voices. It doesn’t take long for Nessa to realize that the voices calling out to her belong to the dead—a gift she’s inherited from her grandmother, which comes with special responsibilities.

On the cusp of 50, suave advertising director Harriett Osborne has just witnessed the implosion of her lucrative career and her marriage. She hasn’t left her house in months, and from the outside, it appears as if she and her garden have both gone to seed. But Harriett’s life is far from over—in fact, she’s undergone a stunning and very welcome metamorphosis.

Ambitious former executive Jo Levison has spent thirty long years at war with her body. The free-floating rage and hot flashes that arrive with the beginning of menopause feel like the very last straw—until she realizes she has the ability to channel them, and finally comes into her power.

Guided by voices only Nessa can hear, the trio of women discover a teenage girl whose body was abandoned beside a remote beach. The police have written the victim off as a drug-addicted sex worker, but the women refuse to buy into the official narrative. Their investigation into the girl’s murder leads to more bodies, and to the town’s most exclusive and isolated enclave, a world of stupendous wealth where the rules don’t apply. With their newfound powers, Jo, Nessa, and Harriett will take matters into their own hands…


Praise For The Change: A Novel…

“Miller triumphs...The Change is that rare treat: a suspenseful story with great pacing, memorable characters, and an engaging voice. Fantastic in every way, this fierce anthem against misogyny is a smash.” — Publishers Weekly (starred review)

“The novel takes on serious issues but doesn’t take itself too seriously; there’s plenty of mordant humor, a suspenseful plot, and mostly brisk pacing. Crime fiction, superpower fantasy, and sharp satire about sexism and ageism mesh for a satisfying read.” — Kirkus Reviews

"A delicious fantasy full of righteous rage, thorny entanglements, powerful sisterhood, and (wink, nudge) herbal remedies. Forget the teen dabblers of The Craft, or the lovelorn witches of Practical Magic: Joe, Nessa, and Harriet are the dynamic coven that angry feminist dreams are made of, here to remind us that everything gets better with age and experience— especially revenge." — Kat Rosenfield, author of No One Will Miss Her

“Searing and witty and full of so much warranted rage. This was a book I didn’t know I was aching for. I cheered on every page.” — Erin A. Craig, New York Times bestselling author of House of Salt and Sorrows and Small Favors

"A roar of rage, a pacy page-turner, I loved it with all my broken heart. Read it. You’ll love it."
— Marian Keyes, New York Times bestselling author

"There is a specter haunting women - the specter of rage. Kirsten Miller has woven a fun, gripping, lush, real fable, a Stepford Wives for the twenty-first century, a Witches of Eastwick if it had actually been written by a woman. THE CHANGE is poisonous as henbane, and twice as delicious." — Katherine Howe, New York Times bestselling author

Kirsten Miller is a groundbreaking feminist author in YA literature, best known for her popular Kiki Strike series. In addition to writing novels, Kirsten spent twenty-five years as a strategist in the advertising industry. During that time she worked for some of the largest agencies in the world, as well as boutique agencies and an eight-person start up. She’s proud to have quit at least two of those jobs over ads and incidents described in The Change.