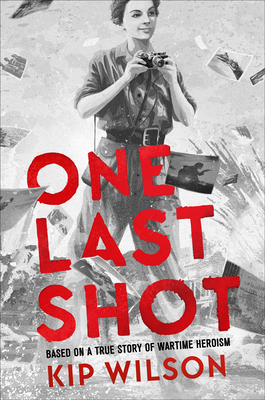 From critically acclaimed author Kip Wilson comes this gripping coming of age historical fiction novel in verse about Gerda Taro, a vibrant, headstrong photojournalist with a passion for capturing the truth amid political turmoil and the first woman photojournalist killed in combat.

The daughter of Polish Jewish immigrants, Gerta Pohorylle doesn't quite fit in with her German classmates. While she's away at boarding school, however, she becomes a master at reinventing herself as a vibrant, confident young woman. When she returns from school, she joins a group of young activists and is arrested for distributing anti-Nazi propaganda. Her family decides she must leave Germany.

In Paris, Gerta meets André Friedman, a Hungarian photographer eager for fame and fortune, who fosters Gerda's interest in photography. Together the pair reinvents their brand of photojournalism under the names Robert Capa and Gerda Taro, in part to gloss over their Jewish ancestry, and soon they're traveling to areas of military conflict and selling their photos for high prices. Gerda continues to travel solo through Europe, often the only woman in journalism circles. Her assignments eventually lead her to Spain to cover the growing conflict that is becoming the Spanish Civil War (1936-1939), part of events leading to World War II.

True to her political beliefs, Gerda pushes closer and closer to the front line, eager to capture the lives and vibrant hopes of Spanish republican forces fighting against fascism, only to lose sight of her own safety.

"Taro lived her convictions, spending her final days in the chaos and carnage of the Spanish Civil War, determined to get the best shot, the one that would make a difference. . . . Wilson’s poems read so smoothly, and her subject is so compelling, that readers may be tempted to race through, but slowing down or reading aloud illuminates the full depth and poignancy that's on display." — Booklist (starred review)

"Wilson shares Pohorylle’s story with stunning efficiency through an economy of language that wrings sweetness from every word. The free-form verse is written in the present tense, each moment of the story its own indelible snapshot. The book captures the subject’s life and the times she lived through with complexity and depth: This is not just a story of the violence of fascism but of the burning joy of freedom and the exhilaration of shaping, with sweat and blood, a better world. It’s a struggle that continues today, and Wilson skillfully draws connections between past and present." — Kirkus Reviews (starred review)

“Expertly researched and told in verse sharp and shining as a camera flash, Kip Wilson captures the life of Gerda Taro in thrilling, heartbreaking snapshots to tell the fascinating story of a talented and passionate young woman who sought to bear witness to and expose the dark truths of war and fascism at any cost.” — R. M. Romero, author of The Ghosts of Rose Hill, A Warning About Swans, and The Dollmaker of Kraków

Praise for the WHITE ROSE: ★ "[M]oving and inspiring....this is a model of well-researched and riveting historical fiction."  — Booklist (starred review)

Praise for the WHITE ROSE: ★ "[T]imely and relevant....This tale based on the real life of a young activist, supported by extensive back matter, belongs in all collections serving young teens."  — School Library Journal (starred review)