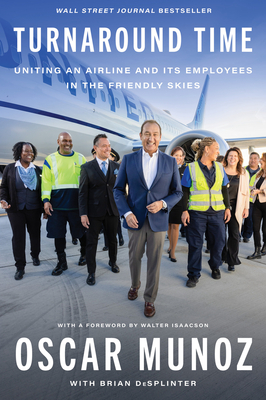 Uniting an Airline and Its Employees in the Friendly Skies

Go behind the scenes of the aviation industry as Oscar Munoz tells soulful lessons about how he rose from humble immigrant origins to lead United Airlines through one of modern business’ greatest turnarounds, navigating crises and even a heart transplant along the way, but ultimately inspiring his employees to unite and fly as one.

United Airlines, the iconic brand that invented the “Friendly Skies” and built modern aviation, found itself amid rough turbulence and was anything but united in 2015. With its reputation in freefall, operations and profits cratering, customer and employee trust fraying—and competitors pushing into coveted routes—United needed a new captain to turn things around, fast.

A Mexican immigrant and the first Latino to run a major airline, Oscar Munoz was an unlikely choice to take the helm, and he proved himself a very kind of different CEO. Embarking on a global listening tour, talking with thousands of employees and customers, he sold United’s board on an unconventional Wall Street-defying strategy: Put Employees First. He believed the people of United, who had kept faith through it all, needed someone to believe in, and who’d believe in them.

While trying to bring United back to life, a private drama was unfolding when 37 days into the job, Munoz suffered a heart attack, launching an against-the-clock race for a heart transplant, all while he led United—even from a hospital bed—through its crucible moment.

Five years later, United emerged as a true aviation success story, leading the industry with sky-high metrics, while earning a genuine trust from employees and labor, built on what Munoz called “The New Spirit of United.”

In this deeply personal memoir, go behind the scenes of commercial aviation as Oscar tells how his employees pulled off one of the greatest comeback feats of all-time, and offers soulful leadership lessons much needed in today’s world: listening with heart and empathy; defending employees, especially through PR crises, including Covid; building durable cultures that are profitable because they’re principled; and charting a genuinely inclusive economy for the future.