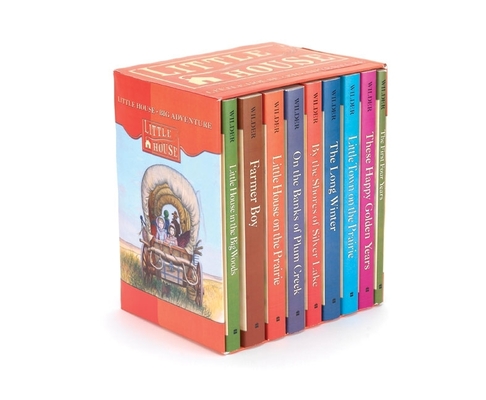 Meet the Ingalls family—Laura, Ma, Pa, Mary, and baby Carrie, who all live in a cozy log cabin in the big woods of Wisconsin in the 1870s. Though many of their neighbors are wolves and panthers and bears, the woods feel like home, thanks to Ma’s homemade cheese and butter and the joyful sounds of Pa’s fiddle.

As Laura Ingalls is growing up in a little house in Kansas, Almanzo Wilder lives on a big farm in New York. He and his brothers and sisters work hard from dawn to supper to help keep their family farm running. Almanzo wishes for just one thing—his very own horse—but he must prove that he is ready for such a big responsibility.

When Pa decides to sell the log house in the woods, the family packs up and moves from Wisconsin to Kansas, where Pa builds them their little house on the prairie!  Living on the farm is different from living in the woods, but Laura and her family are kept busy and are happy with the promise of their new life on the prairie.

The Ingalls family lives in a sod house beside Plum Creek in Minnesota until Pa builds them a new house made of sawed lumber. The money for the lumber will come from their first wheat crop. But then, just before the wheat is ready to harvest, a strange glittering cloud fills the sky, blocking out the sun. Millions of grasshoppers cover the field and everything on the farm, and by the end of a week, there is no wheat crop left.

By the Shores of Silver Lake

Pa Ingalls heads west to the unsettled wilderness of the Dakota Territory. When Ma, Mary, Laura, Carrie, and baby Grace join him, they become the first settlers in the town of De Smet. Pa starts work on the first building of the brand new town, located on the shores of Silver Lake.

The first terrible storm comes to the barren prairie in October. Then it snows almost without stopping until April. With snow piled as high as the rooftops, it’s impossible for trains to deliver supplies, and the townspeople, including Laura and her family, are starving. Young Almanzo Wilder, who has settled in the town, risks his life to save the town.

Little Town on the Prairie

De Smet is rejuvenated with the beginning of spring. But in addition to the parties, socials, and “literaries,” work must continue. Laura spends many hours sewing shirts to help Ma and Pa get enough money to send Mary to a college for the blind. But in the evenings, Laura makes time for a new caller, Almanzo Wilder.

Laura must continue to earn money to keep Mary in her college for the blind, so she gets a job as a teacher. It’s not easy, and for the first time she’s living away from home. But it gets a little better every Friday, when Almanzo picks Laura up to take her back home for the weekend. Though Laura is still young, she and Almanzo are officially courting, and she knows that this is a time for new beginnings.

Laura Ingalls and Almanzo Wilder have just been married! They move to a small prairie homestead to start their lives together. But each year brings new challenges—storms, sickness, fire, and unpaid debts. These first four years call for courage, strength, and a great deal of determination. And through it all, Laura and Almanzo still have their love, which only grows when baby Rose arrives.