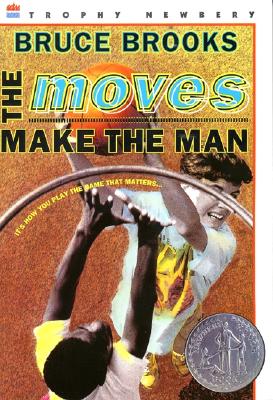 The Moves Make the Man

Jerome foxworthy -- the Jayfox to his friends -- likes to think he can handle anything. He handled growing up without a father. He handled being the first black kid in school. And he sure can handle a basketball.

Then Jerome meets bix Rivers -- mysterious and moody, but a great athlete. So Jerome decides to teach bix his game. He can tell that bix has the talent. All he's got to do is learn the right moves....

Bruce Brooks was born in Virginia and began writing fiction at age ten. He graduated from the University of North Carolina at Chapel Hill in 1972 and from the University Of Iowa Writer's Workshop in 1980. He has worked as a newspaper reporter, a magazine writer, newsletter editor, movie critic, teacher and lecturer.

Bruce Brooks has twice received the Newbery Honor, first in 1985 for Moves Make the Man, and again in 1992 for What Hearts. He is also the author of Everywhere, Midnight Hour Encores, Asylum for Nightface, Vanishing, and Throwing Smoke. He lives in Brooklyn, NY.