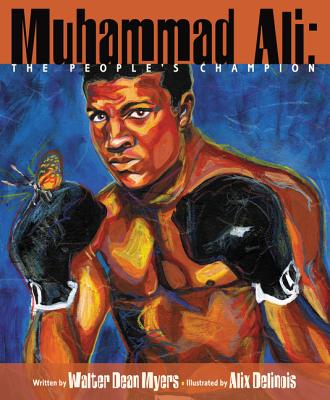 This acclaimed picture book biography is a perfect introduction to the great Muhammad Ali. Reviewers praised this book as "powerful," "action-filled," and "dramatic."

Myers examines the depth and complexity of the larger-than-life legend and heavyweight champion of the world, and the bold, vibrant art of Alix Delinois reflects the beauty and power of the man who could "float like a butterfly, sting like a bee."

This nonfiction picture book is a strong choice for sharing in the classroom or at home. Use it as an introduction to one of the most significant and celebrated sports figures in history.

“Exuberant. Delinois’s painterly illustrations express the famous boxer’s energy as well as the political upheaval around him.”
— The Horn Book

“Unexpectedly far reaching, this is a Muhammad Ali for the thinking child.”
— ALA Booklist

“Artwork, rendered in a painterly style, is dramatic and enhances the boldness of this boxing superstar.”
— School Library Journal

“This artful biography of Muhammad Ali begins with his childhood in Louisville, Kentucky—he started learning how to fight after his bicycle was stolen—and offers snapshots of his hard-earned career in the world of boxing. Visually striking.”
— Publishers Weekly

“Delinois’s emotive style packs a prismatic punch of its own. The total effect is energetic and disorienting, getting to the raw emotional impact of victory, loss, confrontation and peace.”
— Kirkus Reviews

“Illustrations in oils in rich browns, shades of grays, and white highlights show the fighter Muhammad Ali in many action poses exhibiting his strength and lightning speed. Sure to provide inspiration for young readers.”
— Booklist

Alix Delinois was born in Saint Marc, Haiti, and moved to Harlem with his family when he was seven years old. He received his BFA in illustration from Pratt Institute and a master’s degree in art education from Brooklyn College. He lives in Harlem, New York.