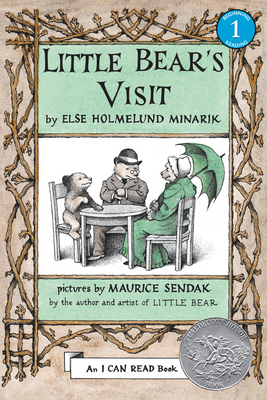 A Caldecott Honor Award Winner (I Can Read Level 1)

Little Bear likes to visit Grandmother and Grandfather Bear. He likes to try on Grandfather’s hat. He likes Grandmother’s cooking. But best of all, he loves the stories his grandparents tell him, of robins and goblins, and of Mother Bear when she was little.

This Caldecott Honor winner is among the beloved classic Little Bear books from Else Holmelund Minarik and Maurice Sendak. The first, Little Bear, launched the I Can Read early reader series in 1957.

In the Little Bear stories, we meet Little Bear, whose adventures are filled with humor and joy. And we meet Mother Bear, who is there whenever Little Bear needs her. When it is cold and snowy outside, she finds just the right outfit for Little Bear to play in. When he goes to the moon, she has a hot lunch waiting for him on his return. And, of course, she never forgets his birthday.

An ALA Notable Children's Book, this Level One I Can Read is full of warm and lovingly playful stories that are perfect for children learning to sound out words and sentences. Whether shared at home or in a classroom, the short sentences, familiar words, and simple concepts of Level One books support success for children eager to start reading on their own.