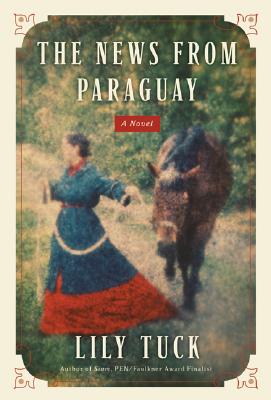 The News from Paraguay

For him it began with a bright blue parrot feather that fell from Ella Lynch's hat when she was horseback riding in the Bois de Boulogne. The year was 1854, and Francisco Solano Lopez -- "Franco," the future dictator of Paraguay -- began his courtship of the young, beautiful Irishwoman with a poncho, a Paraguayan band, and a horse named Mathilde.

From Paris, Ella Lynch follows Franco to Asunción, where she reigns as his mistress. Isolated and estranged in this new world, she embraces her lover's ill-fated dream -- one fueled by outsize imperial ambition and heedless arrogance, and with devastating consequences for Paraguay and all its inhabitants.

A historical epic that tells an unusual love story, The News from Paraguay offers a kaleidoscopic portrait of nineteenth-century Paraguay, a largely untouched wilderness where Europeans and North Americans intermingle with both the old Spanish aristocracy and native Guaraní Indians.

The urgency of the narrative, the imaginative richness of its intimate detail, and the wealth of characters whose stories are skillfully layered and unfolded recall the epic novels of Gabriel García Márquez and Mario Vargas Llosa. The News from Paraguay captures the devastating havoc wrought on both a country's fate and a woman's heart by ruthless ambition and war.


Praise For The News from Paraguay: A Novel…

“Compelling…the stuff that good fiction is made of: complex characters and an intricate narrative.”
— Newsday

“The perfect setting for Tuck’s dark wit.”
— The New Yorker

“The episodic style achieves many lovely moments…images are so vivid you can almost smell them.”
— Washington Post Book World

“THE NEWS FROM PARAGUAY captures the physical beauty of an exotic land in Tuck’s characteristically exact, evocative prose.”
— Publishers Weekly

“Elegant …the author’s research is impressive … a rich and rewarding read.”
— Publishers Weekly

Born in Paris, LILY TUCK is the author of four previous novels: Interviewing Matisse, or the Woman Who Died Standing Up; The Woman Who Walked on Water; Siam, or the Woman Who Shot a Man, which was nominated for the 2000 PEN/Faulkner Award for Fiction; and The News from Paraguay, winner of theNational Book Award. She is also the author of the biography Woman of Rome: A Life of Elsa Morante. Her short stories have appeared in The New Yorker and are collected in Limbo and Other Places I Have Lived. Lily Tuck divides her time between Maine and New York City.