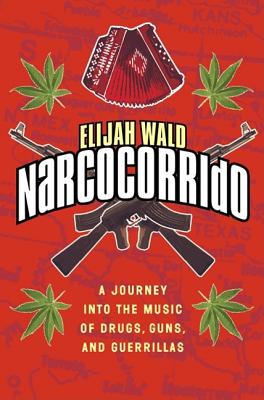 A Journey into the Music of Drugs, Guns, and Guerrillas

In the first full-length exploration of the contemporary Mexican corrido, award-winning author Elijah Wald blends a travel narrative with his search for the roots of this unusual and controversial genre -- a modern outlaw music that blends the sensibilities of medieval ballads with the edgy grit of gangsta rap. While opening up a rich musical world, this book paints a picture of modern Mexican culture as it is seen by the people in the streets: raw and romantic, old fashioned and revolutionary, violent and poetic.

Wald traveled through much of Mexico and the southwestern United States (mostly hitchhiking, with a guitar on his back) in order to find notorious corridistas. From international superstars sell millions of albums to rural singers documenting current events for their neighbors in the regions dominated by guerrilla war, Wald was able to visit these songwriters in their homes, trek up to mountain villages, explore the heartland of the Mexican drug traffic, and check out the scene in urban centers such as Los Angeles and Mexico City.

The corrido genre is famous for its hard-bitten songs of drug traffickers and gunfights, and also functions as a sort of musical newspaper, singing of government corruption, the lives of immigrants in the United States, and the battles of the Zapatista rebellion in Chiapas. Since the days of the Mexican Revolution, corridos have been the musical voice of the poor and oppressed, but also a sensational actiongenre that has spawned dozens of his movies and has been attacked by conservative politiciana and anti-drug crusaders. Through largely unknown to English speakers, corridos top the Latin charts and dominate radio playlists both in the United States and points south.

Wald illustrates the power of this music and the subculture it has created. He provides in-depth looks at the songwriters who have transformed groups like the awesomely popular Tigres del Norte into enduring superstars, as well as the younger artists who are carrying the corrido into the twentyfirst century. In searching for the poetry and social protest behind the gaudy lyrics of powerful drug lords, Wald shows how popular music can remain the voice and "newspaper" of a people, even in a modern world ripe with globalization, electronic media, and gangsters who ship cocaine in 747s.


Praise For Narcocorrido: A Journey into the Music of Drugs, Guns, and Guerrillas…

“Wald is an engaging writer, and Narcocorrido a must-have for those wanting an introduction to the genre.”
— Austin Chronicle