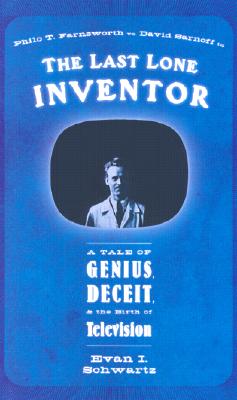 A Tale of Genius, Deceit, and the Birth of Television

By Evan I. Schwartz

In a story that is both of its time and timeless, Evan I. Schwartz tells a tale of genius and greed, innocence and deceit, and corporate arrogance versus independent brilliance. In other words, the very qualities that have made this country -- for better or for worse -- what it is.

Many men have laid claim to the title "The Father of Television" but Philo T. Farnsworth is the true genius behind what may be the most influential invention of our time. Farnsworth may have ended up a footnote in history, yet he was the first to demonstrate an electronic process for scanning, transmitting and receiving moving images, a discovery that changed the way we live.

Growing up on a small farm in Idaho, Farnsworth was fascinated by anything scientific, especially the newest thing on the market -- radio. Wouldn't it be even more miraculous to project images along with the sound? Driven by his obsession, Farnsworth found a local philanthropist willing to fund his dream. By the age of twenty, in 1926, Farnsworth was operating his own laboratory above a garage in San Francisco and filing his first patent applications. The resulting publicity brought him to the attention of David Sarnoff, the celebrated founder of the NBC radio network, whose own RCA laboratories soon began investigating -- without much success -- a way to transmit a moving image. Determined to control television the way he monopolized radio -- by owning all the royalty producing patents--Sarnoff, from the lofty heights of his office in a New York skyscraper, devised a plan to steal credit for Farnsworth's designs.

Vividly written, and based on original research, including interviews with surviving members of the Farnsworth family The Last Lone Inventor is the story of the epic struggle between two equally passionate adversaries and how their clash symbolized a turning point in the culture of creativity.

As a journalist, Evan has been covering information technology for 15 years. He is a former editor at BusinessWeek, where he covered software and digital media and was part of teams that produced 12 cover stories and won a National Magazine Award and a Computer Press Award. In recent years, he has written for The New York Times, WIRED, and MIT's Technology Review.

Evan's first book, titled WEBONOMICS, published by Broadway Books, a division of Random House, has ranked as Amazon.com's #1 bestselling business book and was chosen as a finalist for two major awards: The Global Business Book Award as well as the Computer Press Award. International editions have been published in eight countries.

Evan's second book, DIGITAL DARWINISM, from the same publisher, also hit #1 on Amazon's business list shortly after its release, in June 1999. Now in its twelfth hardcover and first paperback printing in the U.S., it is available in the U.K., from Penguin, and has been translated into eight other languages. It too was named a finalist for the Computer Press Award for Non-Fiction Book of the Year.

Evan holds a B.S. in computer science from Union College in Schenectady, New York, and lives with his family in Brookline, Mass.


Praise For The Last Lone Inventor: A Tale of Genius, Deceit, and the Birth of Television…

“…Fascinating… A riveting American classic of independent brilliance versus corporate arrogance. I found it more fun than fiction.”
— James Bradley, author of Flags of Our Fathers

“… The fascinating inside story of how this eccentric loner invented television and fought corporate America.”
— Walter Isaacson, chariman, CNN

“[A] gripping and eminently readable saga of the birth of television and the death of the Edisonian myth.”
— Darwin magazine
or
Not Currently Available for Direct Purchase
Copyright © 2020 American Booksellers Association