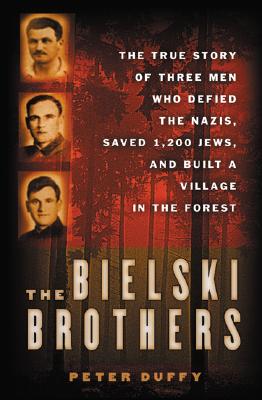 The True Story of Three Men Who Defied the Nazis, Saved 1,200 Jews, and Built a Village in the Forest

It is one of the most remarkable dramas of World War II -- untold until now.

In 1941, three young men -- brothers, sons of a miller -- witnessed their parents and two other siblings being led away to their eventual murders. It was a grim scene that would, of course, be repeated endlessly throughout the war. What makes this particular story of interest is how the survivors responded. Instead of running or capitulating or giving in to despair, these brothers -- Tuvia, Zus, and Asael Bielski -- did something else entirely. They fought back, waging a guerrilla war of wits and cunning against both the Nazis and the pro-Nazi sympathizers. Along the way they saved well over a thousand Jewish lives.

Using their intimate knowledge of the dense forests surrounding the Belorussian towns of Novogrudek and Lida, the Bielskis evaded the Nazis and established a hidden base camp, then set about convincing other Jews to join their ranks. When the Nazis began systematically eliminating the local Jewish populations -- more than ten thousand were killed in the first year of the Nazi occupation alone -- the Bielskis intensified their efforts, often sending fighting men into the ghettos to escort Jews to safety. As more and more Jews arrived each day, a robust community began to emerge, a "Jerusalem in the woods." They slept in camouflaged dugouts built into the ground. Lovers met, were married, and conceived children. The community boasted a synagogue, a bathhouse, a theater, and cobblers so skilled that Russian officers would wait in line to have their boots reshod.

But as its notoriety grew, so too did the Nazi efforts to capture the rugged brothers; and on several occasions they came so near to succeeding that the Bielskis had to abandon the camp and lead their massive entourage to newer, safer locations. And while some argued in favor of a smaller, more mobile unit, focused strictly on waging battle against the Germans, Tuvia Bielski was firm in his commitment to all Jews. "I'd rather save one old Jewish woman," he said, "than kill ten Nazis."

In July 1944, after two and a half years in the woods, the Bielskis learned that the Germans, overrun by the Red Army, were retreating back toward Berlin. More than one thousand Bielski Jews emerged -- alive -- on that final, triumphant exit from the woods.

The Bielski Brothers is a dramatic and heartfelt retelling of a story of the truest heroism, a historic testament to courage in the face of unspeakable adversity.

Peter Duffy is the author of The Bielski Brothers. He lives in New York City with his wife and daughter.


Praise For The Bielski Brothers: The True Story of Three Men Who Defied the Nazis, Saved 1,200 Jews, and Built a Village in the Forest…

“This remarkable story would make a terrific movie…. A story about heroes, and Duffy does a masterful job.”
— Publishers Weekly (starred review)

“Fast-paced and deeply moving...inspiring in its representation of the heroism of ordinary people.”
— Washington Post

“An engrossing, inspiring narrative ... of an incredible victory amid an immeasurable tragedy.”
— Dallas Morning News

“A haunting book...with the grip of good fiction and the punch of hard truth.”
— Chicago Tribune

“An extraordinary story of resistance.”
— The Spectator

“Powerful! The strength of the human spirt shines on in [this] beautifully written book.”
— Paula Zahn, CNN Live from the Headlines

“Remarkable [and] surprising ... Duffy’s book is a gripping and overdue tribute to the brothers’ resourcefulness and courage.”
— London Times

“A fascinating story!”
— The Economist

“[A] dramatic and heartfelt story of unbelievable courage in the face of unspeakable adversity.”
— PW Daily

“An exciting, well-paced story about honor, courage and duty. An inspiration.”
— Howard Blum, author of THE BRIGADE
or
Not Currently Available for Direct Purchase
Copyright © 2020 American Booksellers Association