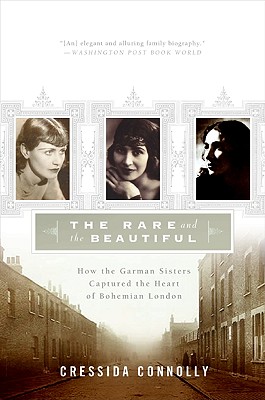 The Rare and the Beautiful

The Art, Loves, and Lives of the Garman Sisters

The garman sisters, who were born in England's Midlands and whose scandalous lives placed them at the center of European cultural activity in the middle of the twentieth century, were famous for their passion for the arts, defiance of convention, and the power to turn heads and break hearts. Their exquisite taste, colorful personalities, and unleashed pursuit of romance earned them a unique place in London's legendary bohemia, inspiring a generation of artists and writers.

Kathleen, an enigmatic artist's model and aspiring pianist, was the lover of the controversial American-born sculptor Jacob Epstein, who immortalized her in seven sensual portraits, fathered her three children, and became, at the end of his life, her husband. Kathleen's sister Mary married the maverick poet Roy Campbell, whose verse attack on the Bloomsbury group following Mary's affair with Vita Sackville-West caused a literary scandal. Mary and Roy, enamored by Mediterranean culture and lifestyle, lived in Spain, Portugal, and the south of France during the continent's turbulent decades, where inspiration and destruction came to them in equal measure. Lorna, the youngest and most radiant of the sisters, became the lover of the young poet Laurie Lee and the painter Lucian Freud, each of whom later married one of her nieces.

The Garman sisters became involved in the radical literary and political circles of Europe between the two world wars. Their lifestyle was outside the prevailing mores: bisexuality, unfaithfulness, and illegitimate children were a matter of course. Headstrong and flamboyant, they sidelined their own talent for writing, painting, and music, their friendships, material comforts -- even their own children -- in the cause of art and beauty.

In fourteen short chapters, The Rare and the Beautiful -- inspired by the exquisite Garman Ryan art collection, bequeathed by Kathleen Garman and including works by Bonnard, Constable, Picasso, Degas, Pissarro, Braque, Modigliani, and van Gogh -- evokes the extraordinary milieu of scandal, high drama, and high culture that defined twentieth-century bohemia. An unorthodox biography of women who broke the rules with inimitable style, it is also a thoughtful meditation on the power of the muse, the glamour of art, and the personal sacrifice it exacts.

Cressida Connolly is the daughter of the late Cyril Connolly. Her collection of short stories, The Happiest Days, won the PEN/MacMillan Prize. She contributes reviews and arts features to many publications, including the Daily Telegraph, the Observer, and Vogue.