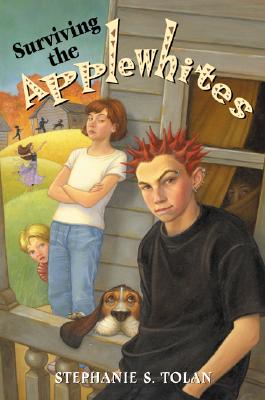 The side-splittingly funny Newbery Honor Book about a rebellious boy who is sent to a home-schooling program run by one family—the creative, kooky, loud, and loving Applewhites!

Jake Semple is notorious. Rumor has it he managed to get kicked out of every school in Rhode Island, and actually burned the last one down to the ground.

Only one place will take him now, and that's a home school run by the Applewhites, a chaotic and hilarious family of artists: poet Lucille, theater director Randolph, dancer Cordelia, and dreamy Destiny. The only one who doesn't fit the Applewhite mold is E.D.—a smart, sensible girl who immediately clashes with the defiant Jake.

Jake thinks surviving this new school will be a breeze . . . but is he really as tough or as bad as he seems?

Stephanie S. Tolan is the author of more than twenty-five books for young readers, including Listen!, which won the Christopher Award and the Henry Bergh ASPCA Award. Her New York Times bestselling novel Surviving the Applewhites received a Newbery Honor and was named a Smithsonian Notable Children’s Book, a School Library Journal Best Book for Children, an ALA Booklist Editor’s Choice, an American Library Association Notable Children’s Book, and an American Library Association Best Book for Young Adults. Tolan has left her home by the small lake in a big woods of North Carolina and now lives in the Hudson River Valley of upstate New York with a view of the Catskills Mountains and the prospect of wintertime cross country skiing. You can visit her online at www.stephanietolan.com.


Praise For Surviving the Applewhites…