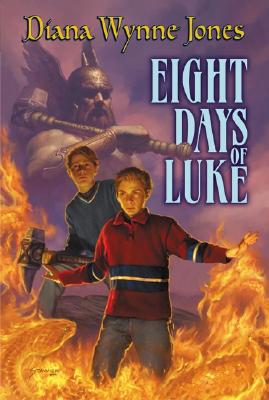 There seemed nothing strange about Luke to begin with, except perhaps the snakes. If they were snakes -- David wasn't sure. He was just grateful for a companion as agreeable as Luke, who seemed able to twist anyone around his finger, even David's odious relatives. "Just kindle a flame and I'll be with you, " Luke said, and he always was -- which turned out to be more awkward than useful in the end.

For who were the people who seemed to be looking for Luke: the man with one eye; the massive, malevolent gardener, Mr. Chew; the offensively sprightly Frys; the man with ginger hair? Why were ravens watching the house, one in front and one at the back gate? And then of course there was the fire. .


Praise For Eight Days of Luke…

An immensely enjoyable and dramatic story which should not be missed.
— Times Literary Supplement (London)

A smooth blend of myth and reality, a task that Jones performs with ease and assurance.
— Publishers Weekly