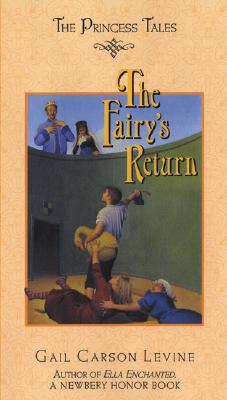 Boy meets princess, and it's love at first sight. Both laugh at the same jokes. Both are named after birds. His name is Robin, hers is Lark. Could there ever have been a more perfect match?

But alas! King Harrumphrey won't let Lark marry a baker's son. And Robin is betrothed to someone else.

Now toss in Robin's nonsense-talking brothers, Nat and Matt, their versifying father, and Ethelinda, the fairy who wrought havoc in The Fairy's Mistake, and you've got a "nutcrazical" situation!

A hilarious spoof on "The Golden Goose" by the Brothers Grimm, The Fairy's Return is the sixth Princess Tale from beloved Newbery Honor author and master fairy tale reteller Gail Carson Levine.


Praise For The Fairy's Return…

The real draw of these attractively designed books is the inventive use of folkloric elements woven into charming, original stories.
— ALA Booklist